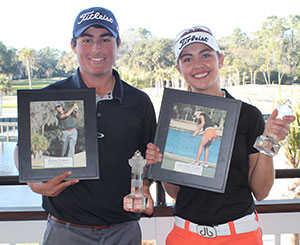 Nimmer defeated Hilton Head Island's Andrew Orischak in a one-hole playoff. Valdes also won in a one-hole playoff, defeating Annika Bovender of Mount Pleasant. There were 84 players in the tournament, including six players who won local qualifying rounds. The rest of the players were invited by the tournament. Thirteen states and multiple countries were represented in the 24th edition of the nationally renowned junior championship.