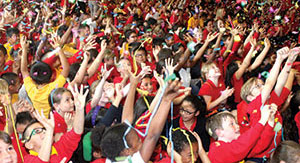 The announcement during a live statewide telecast was greeted with loud cheers from Red Cedar students, who danced and sang with parents, staff and community supporters gathered in the school’s cafeteria. Despite increasing enrollments and higher poverty levels – nearly three-quarters of Red Cedar’s students come from families with incomes low enough to qualify them for free or reduced-price lunches – the school has steadily improved academic achievement and has become one of the top-rated schools in the state serving high-poverty populations. Rated “Average” on its 2011 school report card published by the South Carolina Department of Education, Red Cedar improved to “Good” in 2012 and 2013 and “Excellent” in 2014. Designated as a federal Title I school because of its high poverty levels, Red Cedar earned two Title I distinctions this school year (Title I Reward School for Progress and Title I Reward School for Performance).  Red Cedar was the only Beaufort County school to earn both commendations this school year.