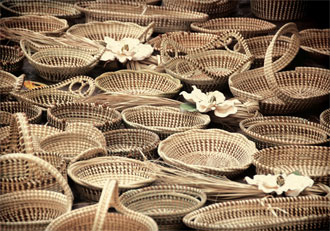 Anyone with a hankering to try their hand at making a sweetgrass basket – or to learn how they are made – need look no further than the Coastal Discovery Museum at Honey Horn on Hilton Head Island.

Daurus Niles, an expert weaver of sweetgrass baskets, conducts a hands-on class about the enduring Gullah art every Saturday morning at the museum from now through the end of February.

Niles said everyone comes away from the class having made something under her tutelage. The classes are two hours long, running from 10:30 a.m. to 12:30 p.m., and cost $65, which includes the materials the participants use.

“The reason I started teaching was I thought it would give those in the class an appreciation for the art,” Niles explained. “Some people say they are all thumbs and can’t do a craft, but I teach them. When they leave, they hug me because now they have bragging rights with their friends.”

“It makes me feel great,” she added.

Niles, who lives in Summerville, learned how to make sweetgrass baskets as a child from her grandmother and great-grandmother. She said it began doing a flat piece – maybe a placemat or coasters – then moved on to starters, such as small baskets, .and eventually got to coiling and shaping the larger baskets. 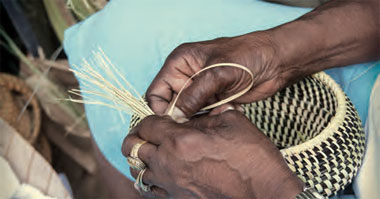 She gave up basket weaving for a number of years then took it up again about six years ago after a 27-year career as a hair stylist, and teaching hair styling, when her youngest daughter graduated from high school.

Niles said she didn’t want to get a booth to sell her baskets at the Charleston Market – it was too crowded, so came to Bluffton and joined with her cousin, Michael Smalls, another expert basket maker, in setting up shop making baskets at a Visitors Center on Highway 278 near Route 46, which no longer exists.

She said they were “discovered” by a gentleman who stopped to look over their baskets and asked if they would like to see their works in a museum. The gentleman, she related, said his wife was associated with the Coastal Discovery Museum and gave them her phone number for them to call. She said she called the wife and, while she was very polite, she told her she wasn’t interested.

Niles said the gentleman then brought his wife out to the Visitors’ Center to see their work, and “ she asked if we could set up that day” in the museum.

“And the rest,” she said, “is history.” Baskets that both she and Smalls make are on display and for sale at the museum. Niles said baskets that she has made have found their way to such distant places as Hawaii, Canada, Africa, Germany and Paris, France.

“I have been very blessed,” she concluded.