World famous Lowcountry cuisine consists of everything fresh and local

In the Gullah culture, storytellers have the important function of reciting and remembering genealogy and historical information for their village.

These islanders, former slaves from the West African coastal countries of Senegal and Sierra Leone, have inhabited the Sea Islands for generations, and their unique traditions remain largely intact. Equally important to local culture are the recipes they preserved.

“Growing up Gullah means that you learn to make do with what you’ve got,” said chef David Young, owner of Roastfish & Cornbread restaurant on Hilton Head Island.

Young is a locally famous island ambassador and institution to Gullah cooking. He invited us into his kitchen to experience the flavors of the Lowcountry.

On the morning of our visit a delivery from a local farmer brings a bounty of fresh vegetables including collard greens, celery, parsnip, onions and carrots. Minutes later, the fish truck arrives. Today’s fresh catch is red fish and Young is all smiles.

“Traditional Gullah cooking is very vegetarian based, with lots of fresh vegetables, fish and shellfish Anything that’s local,” he said. “We were raised to live off the land, so we planted our vegetables and fished our waters and caught our shrimp and did the best we could with what we had.”

On the day of our visit, Young featured shrimp and grits with sides of collard greens, sweet potato cornbread and red rice that looked, smelled and tasted like a slice of heaven.

Gullah-style grits are a staple in Young’s kitchen as a quick, easy and versatile side dish. In his recipe, Young uses four cups of water, half cup of butter, one cup of stone ground grits, half teaspoon of black pepper and half teaspoon of garlic. 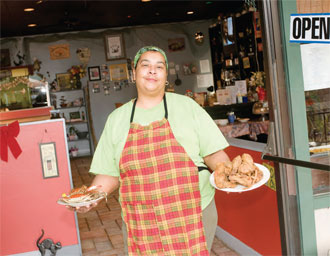 Chef Dye Scott-Rhodan is shown in her old restaurant at Pineland Station. The new Dye’s Gullah Fixin’s is located at 840 William Hilton Parkway in the Atrium Building on Hilton Head Island. Scott Rhodan is an outland Gullah, raised in Ridgeland. Her late father Nathaniel Scott was a skilled farmer. Her mother Earline is a master chef, perfecting recipes handed down from generation to generation. Scott-Rhodan uses those same recipies in her popular restaurant today.

“I often serve them Gullah-style with sautéed shrimp and onions, fresh tomato’s and basil,” Young said. “I also like to pair them with gumbo, bean dishes and fresh vegetables.”

Young is locally famous for his veganstyle Lowcountry red rice, which he serves with collard greens and ovenroasted fish “Slow roasting is a gentle cooking method that guarantees the fish remains moist and tender,” Young said.

He said the most versatile ingredient in his kitchen is homemade vegetable stock. He recommends simmering a hearty mixture of carrots, parsnips, leeks, onion, celery, mushroom, garlic and assorted herbs. The user-friendly stock is then added to flavor vegetarian style soups, stews, bean dishes and rice.

“My goal is to cook it real slow, so that I draw all of the flavor out of the vegetables,” he said.

Hilton Head Island native Elnora Aiken is chairperson of the 18th Annual “Taste of Gullah” to be held from noon to 4 p.m. on Saturday, Feb. 1 at the Arts Center.

Aiken’s favorite local dish is Conch Stew, with includes meat from the shellfish cooked with a ham hock and served over white rice. Some people serve the dish with a side of fresh collard greens.

“Either way you serve it, it tastes real good,” she said.

Visitors to the event should try her family recipe for Hoppin’ John, which is served with red field peas and rice. “It’s red in the package and after it’s combined with the rice some people put in a hog jowl or ham neck bone combined all in one pot,” she said. 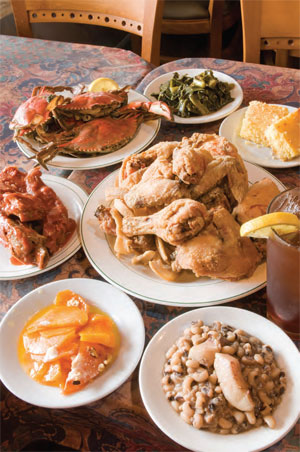 Other local favorites to be featured are shrimp and okra gumbo, fried chicken, shrimp and grits, oysters and grits and stewed crab.

“For us it’s a breakfast meal or dinner meal, depending on your mood,” she said.

Stewed crab and grits include the meat of crab, fried with bacon, then layered with gravy. “Today some people put green peppers in it, but back in the day it was only onion, salt and pepper,” she said.

We discussed the importance of oysters on local culture.

“My mother made a living out of opening oysters at the Oyster House,” Ms. Aiken said. “I remember the men would go out and pick the oysters and the ladies would be back in the oyster house opening them up, then we’d go home and make oysters and grits.”

Her mother’s recipe was fried oysters and rice with onions, bell pepper, celery and seasoning. A traditional Gullah dessert is bread pudding.

“As time passed on people used different flavors but traditionally we used peaches and sugar and real cream and butter,” she said.

“My father was a skilled farmer who was rich in something that money could not buy — the cultural heritage that was passed along from generation to generation,” said chef Dye Scott-Rhodan. “One of the skills he mastered was farming the fields My mom added perfection by preparing the dishes with recipes she got from her mother and grandmother and their mothers. That was passed to my sisters and I.”

She is proud of the rich tradition of the Gullah culture and is doing her best to keep the flavors of the Lowcountry alive. With recipes passed down through generations, Dye uses only the freshest ingredients from the land and sea.