Historic St. James Baptist Church has co-existed with its neighbor, Hilton Head Island Airport, for decades. But last year’s expansion of the airport’s runway and the resulting increase in takeoffs and landings by larger regional airplanes is more than members of the 133-year-old church can take. 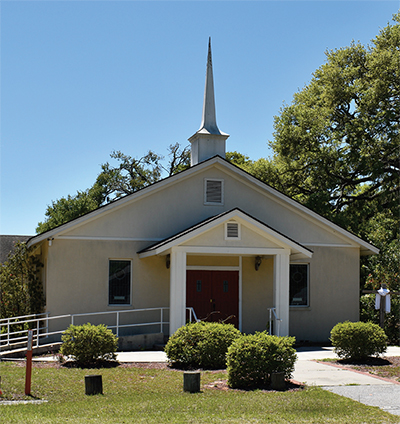 “My observation has been, when I see planes coming over, they are coming in very low,” said Blewett Wright, chairman of the church’s airport committee, adding that with more planes coming in, the location “has become more of a hazard.”

The health and safety of the congregation, approximately 200 members, became a priority, leading the church to begin relocation talks with the town, Wright said. “We’re at point now where it is really not much of a choice,” he said.

Officials at the church, which was founded in 1886, are negotiating with the Town of Hilton Head Island to relocate, along with the historic Cherry Hill School. One new home under consideration is 4.4 acres on Beach City Road. The site, adjacent to Mitchelville Freedom Park, is jointly owned by the town and Beaufort County.

THE ACQUISITION TO PROTECT THE CHURCH WAS ALWAYS NEEDED, EVEN WITH THE OLD RUNWAY.

Hilton Head Town Council in February authorized town manager Stephen G. Riley to negotiate with St. James officials, said Charles Cousins, assistant to the town manager. If the deal goes thorough, the town and county would sell its land to St. James, and Beaufort County would take control of the current church property and combine it with other airport land holdings, Cousins said.

The county and church are working on determining the value of the existing church site, the cost of a new church building and the cost to relocate the school, he said.

“At this point, the plan would be to move Cherry Hill School and build a new church,” Cousins said.

Beaufort County Council committees are vetting the proposed land sale and a recommendation is expected to go to the full council for a vote by June, according to Eric Greenway, community development director for Beaufort County

The FAA, which would pay for most of the acquisition and relocation costs, must also sign off on the purchase plan, Cousins said. Some local funding will also be necessary, he added.

Located at the intersection of Beach City and Dillon roads, St. James has long been in what the FAA calls the airport’s “object-free zone,” which means the church is eligible for federal funding to help pay for the move, Cherry Hill School is right across Dillon Road.

Church and county officials long have known that this move might eventually be necessary.

“The acquisition to protect the church was always needed even with the old runway,” said airport director Jon Rembold.

The proposed parcel on Beach City Road is appealing to the church because of its proximity to Mitchelville, established during the Civil War as the nation’s first self-governing town of freed slaves.

“The church’s overriding desire is to remain in the Mitchelville area,” said Chester Williams, the church’s legal council. “Some people would argue that St. James is the heart of Mitchelville.”

St. James was founded in 1886 by former members of First African Baptist Church, which was established by freed slaves in Mitchelville in 1862. St. James’ current sanctuary — its third — was built in 1972 and renovated in 2005.

Cherry Hill School was built by Mitchelville descendants in 1937 and taught African-American children until 1954. St. James bought the building in 1956.

Rembold said negotiations between town and church officials “have been positive, and the exchange of information has been open and free.”

Wright agreed, “So far, everyone who is in this process has been negotiating in good faith and it has been favorable. We just hope that it continues, and St. James comes out with our expectations (met).”

Once Delta arrives, there will be eight flights a day at the airport, Rembold said. The number of flights on weekends will vary between 10 and 12.

The arrival of additional airlines has prompted the airport to begin exploring the expansion of the terminal facilities, including parking, Rembold said.