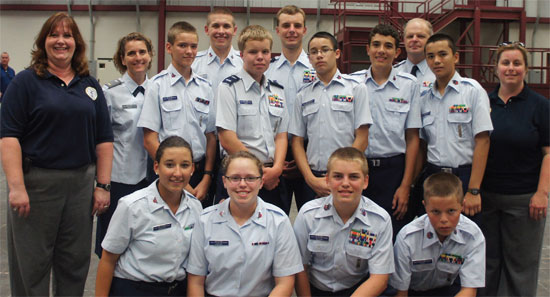 They are young, ambitious and flying high to become future leaders in their communities, schools, churches and every other path in their lives.

These 19 boys and girls, ranging in age from 12 to 18, are members of the Civil Air Patrol (CAP) Cadet Program in the Lowcountry. They dream about careers in the military, space or aviation, and are training diligently on Hilton Head Island now to achieve their goals of their future.

Guiding them every step along the way is Capt. Mark Eudy, DCC (deputy cadets commander). As the director of the youth development program in Beaufort and Jasper counties, Eudy takes great pride in helping to shape strong young bodies and minds into moral and ethical leaders.

“I have the opportunity four times a month to touch the lives of these cadets,” said Eudy, who has been in the CAP for the past four years. “The point is to build leadership for the community and country.”

The teens and Eudy meet every Thursday evening for two hours at an old fixed-based operations building in the general aviation area at Hilton Head Airport, as well as on an occasional Saturday.

Last month, the group was scheduled to attend a weeklong encampment. Physical conditioning, aerospace education, and knowledge of emergency services and operations are ongoing activities. The aerospace education program and intensive classwork ensure that cadets have an appreciation for and knowledge of aerospace issues and advances in technology, within the framework of achieving educational excellence. Emergency services training includes everything from search and rescue missions on the air and ground to disaster relief and humanitarian services.

One incident had the team looking for and finding a single-engine plane that had crashed near the Savannah River. The pilot survived. More common incidents involve coming to the aid of stalled boats in the water.

“It’s important to give the opportunity to young people to be leaders,” Eudy said. “They’re learning to show and exhibit  leadership skills.”

All cadets proceed at their own pace in the program until they reach age 21.

In addition to being introduced to aviation, they hike, get in shape, learn to lead and fly (there’s a four-seat Cessna 172 on stand-by at the airport), and push their boundaries as young individuals.

As they get older, the 26,000 cadets nationwide compete for academic scholarships to further their studies in fields such as engineering, science, aircraft mechanics, aerospace medicine and meteorology. More than 150,000 volunteers with a love of aviation pushed to have their planes and flying skills put to use in defense of their country during World War II. One week prior to the Japanese attack on Pearl Harbor, the War Department, under the jurisdiction of the Army Air Corps, took CAP under its federal wing and let them fly wartime missions.

Together, the volunteers logged 500,000 flying hours while sinking two enemy submarines and saving the lives of hundreds of crash victims. These notable accomplishments prompted President Harry Truman to sign into law the establishment of CAP as a non-profit organization in 1946.

Two years later, CAP was designated as an auxiliary of the U.S. Air Force. Today, CAP also partners with the U.S. Homeland Security Department and the Federal Emergency Management Agency.

In 1971, retired Lt. Col. Raymond Enslow founded the local squadron, one of 1,500 in the country, and still flies with cadets today at the age of 73.

“I enjoy it,” Enslow said. “I love seeing these young people succeed.”