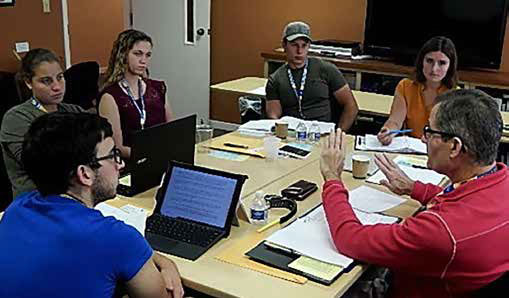 There is a nationally renowned event molding feature leaders that has taken place on Hilton Head Island for more than four decades that you may never have heard of.

The 45th annual College Ethics Symposium will be held at First Presbyterian Church Oct. 13-15, with 34 college students from 10 schools descending on the island to debate ethical standards and moral practices before they head into the business world.

This is the first time the event has been held in person since 2019, and event chairman Roland King is excited that he and the event facilitators will get to mentor students face-to-face.

“We are so thrilled to see folks again. Our world has changed; we’re welcoming lower numbers than in years past, but we’re just happy to give these students an inperson experience once again,” said King, who is in his fourth year working with the Symposium.

The students are housed by families across the island that have signed up to be hosts. Students will spend their days alternating between debating ethical cases and reallife predicaments.

They will also experience island life both with their hosts and via a dolphin watch tour and enjoy a secondday dinner hosted on the church grounds.

The mission of the symposium, planned by a committee made up from representatives from various island churches, is to “foster ethical decision-making by utilizing Christian and moral values.”

“The world is constantly evolving, and students getting jobs these days are faced with more ethical challenges than ever before,” King said. “What we do here is have an open dialogue about situations they have or are likely to face as they embrace adulthood.”

If the speed limit is 45 miles per hour, is it unethical to go 46? Can you engage in an illegal act and still be ethical or moral? Is it OK to overtly practice your faith in the workplace? Is it OK for companies to judge applicants on past less-than-professional statements on social media?

These are some of the questions the students will face as part of this year’s case studies. Conversations are led by accomplished business leaders who are trained in the art of discussion facilitation.

The common thread among all facilitators is a commitment to their ministries and a history of performance and ethical excellence in their chosen profession.

King joined the program four years ago when he was asked by then-chairman Jim Webb to train the facilitators. He is a New Orleans native who moved to the Lowcountry from Detroit after a widespanning career in the automotive industry.

In his time on Hilton Head he has taken an active role in charities such as chairing the Fellowship of Christian Athletes, and has also mentored young men at Bluffton Middle School.

“Too many of these young men are trying to find their way without parental role models in their life,” King said. “I try to show them that with a work ethic and establishing and working toward goals, you can do anything in this world. Just pick something you really, really, really like to do, find someone to pay you for doing it, and you will never work a day in your life.”

The Symposium has hosted more than 4,000 students since it was launched in 1978. King said that he is working with leaders who organize the event to begin an ongoing relationship with former attendees.

“We want to create a database and truly measure the impact we’ve made in their lives and the difference they’ve made in their communities,” he said. “We know anecdotally that we have some incredible success stories, but we want our students to know that they are part of a special group, and getting to see and hear from former attendees can be a very powerful tool to continue building the event.”

King said that event organizers are always looking for new host families to ensure the evolution of the event.