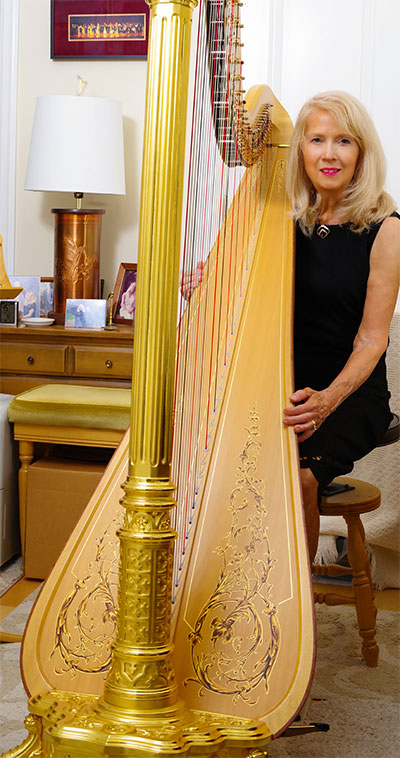 Even before greeting Hilton Head Island resident and professional harpist, Lucy Scandrett, I know she’s a master musician by the ethereal glissando I hear as I approach her front door.

Inside, there are no less than half a dozen harps of various sizes and harp-related figurines too numerous to count.

“Everybody needs a harp,” she professes, ushering me into her practice room where we maneuver around two full-size harps, one of wood, the other gold. Each weighs 80 pounds, supports 47 strings and bears seven pedals at the base.

The instrument’s benefits, she insists, include warding off arthritis, diminishing the pain of headaches and calming anxiety. There’s also the versatility of music that can be played — everything from Bach to Zeppelin’s “Stairway to Heaven.”

“The wonderful thing,” she adds, “anybody can start to play at any age.”

For Scandrett, a native of Charlotte, N.C., lessons began at the age of 3 on a Clark Irish harp, much smaller than the ones before us. Her late mother, Elizabeth Clark, was her teacher.

By the time Scandrett was 5, her mother, who played professionally, arranged for Scandrett to play a song with the Charlotte Symphony. On Sundays they both played in church while Scandrett’s father directed the choir.

“I really loved playing the harp,” she says.

When the director of the famous Barter Theatre in Virginia called looking for a harpist to play the show “The Fantasticks,” Scandrett’s mother declined but suggested they hire her 16-year-old daughter.

“They sent a truck to take me, my grandmother, and my harp to Abington, a four-hour trip, where we stayed in a lovely hotel near the playhouse,” Scandrett recalls.

With only two rehearsals, she mastered the part, thus beginning her professional career.

After obtaining a degree in Harp Performance at Oberlin College Conservatory of Music, Scandrett continued her studies at Converse College in Spartanburg, S.C., earning a Master of Music degree.

Marriage to her husband, Jack, a professional horn player (and heavy lifter who transports her harp to gigs) was followed by a move to Western Pennsylvania, where, in addition to teaching at several universities, Scandrett became the Principal Harpist for the Pittsburgh Ballet Orchestra, the Pittsburgh Opera Orchestra, and the Civic Light Opera Orchestra.

Those years of playing in “the pit” are full of stories.

“You never know what’s going to happen,” she laughs. “My back is to the stage, so I don’t see anything; it’s also dark with tight quarters.”

During one performance of Swan Lake, dry ice was used for dramatic effect, causing a dense cloud to obscure Scandrett’s vision just as she was starting to play a solo.

“It’s one of those moments when you have a harp attack,” she quips.

There was also the night she was playing in a theater production when a suitcase slipped out of an actor’s hand and landed in the narrow space between her and the bass clarinet player. When the same scene approached the following night, Scandrett donned a miner’s hat, causing the conductor to double over in laughter and nearly topple off his podium.

Strings breaking? Too numerous to count, she sighs, which is why she always carries her “little black bag” containing replacements.

“I’ve had so many wonderful, amazing experiences,” she says, describing a trip with the Pittsburgh Youth Symphony to Monaco where they played for Princess Grace, who sat on stage “in a red velvet chair, surrounded by flowers.”

As part of the trio, The Three of Harps, she played at London’s Royal Academy of Music.

She’s also performed with icons like Aretha Franklin and Josh Groban, shaken hands with football giants like “Mean” Joe Greene and Franco Harris, and played for more weddings than she can count, including that of Art Rooney’s daughter.

After an opera performance featuring Joan Sutherland and Luciano Pavarotti, she caught a bouquet of flowers graciously tossed by Sutherland to acknowledge her talent.

Playing for baby showers and hospital patients has been equally rewarding.

But it was the last time she played with her mother and her daughter, Lara, that has grown more treasured over time.

“It was at a small church outside of Charlotte and really special,” she says. “My mother was a wonderful teacher.”

Scandrett’s own love of teaching and performing earned her a Lifetime Achievement Award in 2012 from the American Harp Society (AHS), an organization she’s been intimately involved with, serving as president for eight years and starting chapters of the organization in Pittsburgh and in the Lowcountry after retiring here in 2016.

Although her students are fewer these days, Scandrett still performs locally for public and private events.

This February at St. Andrews By-The-Sea, she joined seven other harpists from the Lowcountry Chapter of AHS, under the direction of Tim Reynolds, to premier an arrangement by world-renowned harpist, Rhett Barnwell, that celebrated Gullah culture.

“Over 400 people came,” she exclaims, adding that she hopes to “bring awareness about the harp” to as many people as possible.

With bookings already in place for 2023, her mission seems secure.