What began as a club for musicians in Hilton Head Plantation more than a decade ago has evolved into a nonprofit organization that uses its combined musical talents to support music education for children in Beaufort County.

Ellie Perry, a retired high school band director and former consultant to the U.S. Department of Education, joined the Hilton Head Plantation Big Band after seeing an announcement in the plantation’s newsletter shortly after the group was formed. When the director of the original band moved on, Perry took over and the band continued to grow from there.

“The music community is really a tight-knit group, and word spread that something was happening over there in Hilton Head Plantation,” Perry said.

Although the band’s name has changed and most of the original members are no longer involved, Perry still plays the keyboard with the band and coaches the singers as vocal section leader. 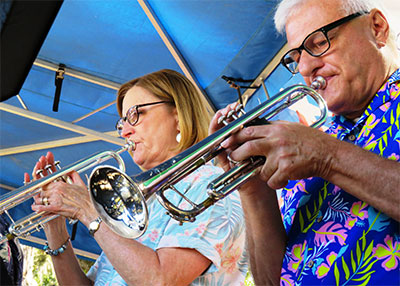 Now known as the Hilton Head Big Band, the group rehearses at Island Lutheran Church on Hilton Head Island and performs a wide array of music at events, such as the annual Italian Heritage Festival. The band uses its profits to refurbish used instruments for children who would like to learn an instrument but don’t have the money to purchase one.

The band is always looking for donations of used musical instruments, which they take to Hamner Music for repair. Owner Jaime Hamner only charges for parts; he does all the repairs free of charge. After he has repaired an instrument, he gives it to The Jazz Corner, which then gives the instrument to a child in need.

Perry said when the band was a Hilton Head Plantation club, they played mostly ‘40s-style music at retirement communities, such as the Cypress of Hilton Head and TidePointe. They played with the Hilton Head Shore Notes at the Hilton Head Island High School Theatre, and they performed free concerts for plantation residents.

Now the band plays hits from the 1960s, 1970s and 1980s as well as some soft jazz and pop/rock. Most of the songs will make audience members want to get up and dance.

“We want people to have as much fun as we do,” conductor and director Pete Stephenson said.

The all-volunteer Hilton Head Big Band is made up of 19 musicians, five vocalists, a lyricist and a songwriter, as well as a team of engineers, arrangers, composers and others who make sure everything runs smoothly. The band includes full saxophone, trumpet, trombone and rhythm sections.

The band’s members come from all backgrounds. There are educators, engineers, doctors and salespeople. There are retired band directors, and there are professional musicians who can be seen playing gigs around the Lowcountry. Some have even played with music legends, including Buddy Rich, James Brown and the Righteous Brothers. Vocalist Amber Cole has sung “The Star-Spangled Banner” at Indianapolis Colts and Indiana Pacers games and at the Indianapolis 500.

“We’re seeing more and more people step out of their normal roles in the band,” Perry said. “They are multitalented.”

Michelle Lindberg, for example, had played in the trumpet section for a couple of years before the other band members realized she also had an amazing voice. So, now she also sings with the band.

“Talking about multitalented,” band president Roger Decelles chimed in, “John Dobson, who plays trombone, now is one of the vocalists. He also plays piano, and because he was a band director before, he sometimes directs the band as well.”

Stephenson said the band is a family affair for several members, whose spouses volunteer at concerts, collect money and work the tents at the events where they perform. Stephenson’s wife, Deb Stephenson, plays the saxophone with the band, but she also handles all the communication to band members, emailing the group about what songs they will be practicing each week.

Decelles’ wife, Donna Decelles, volunteers as well, handling a lot of the administrative side of things, collecting donated instruments and money for the mission.

“It’s the only group that I play in that really feels like a family,” Pete said. “We have our moments of disagreement, but not very often and not for very long.”

Just like a real family, band members and their spouses gather for Christmas dinner and other occasions. They have a pizza party every year at the end of their spring season.

Roger said the organization would like to do even more in the community, but it needs more support.

The most obvious — and entertaining — way to help is to attend their concerts. A portion of ticket sales will support the band’s mission. The band will perform at the Italian Heritage Festival on Oct. 22 at Honey Horn. They will also perform at a dinner dance Nov. 17 at Hilton Head Island Beach & Tennis Resort.

The second way to support the band’s mission is to donate musical instruments that are no longer being used. Finally, the band is looking for more sponsors.

“If there’s a need and we find that need, we will try to fill it,” Roger said. “Because we believe that kids need music in their lives.”

For more information, visit www.hhbigband.com. To book the band for your next event, become a sponsor or donate an instrument, call Roger Decelles at 508-320-6440 or email hhbigband@hotmail.com.