Each year the Rotary Club of Hilton Head Island selects two students to receive a scholarship of $4,000 per year, offering each student $16,000 in scholarship support. Jehanne Marie Arnal from the Heritage Academy and Harper Krimm from Hilton Head Christian Academy are this year’s winners. Arnal will attend The Citadel’s Tommy and Victoria Baker School of Business where she will major in business with a focus on entrepreneurship. Harper will attend Anderson University, majoring in music with concentrations in voice and commercial music. 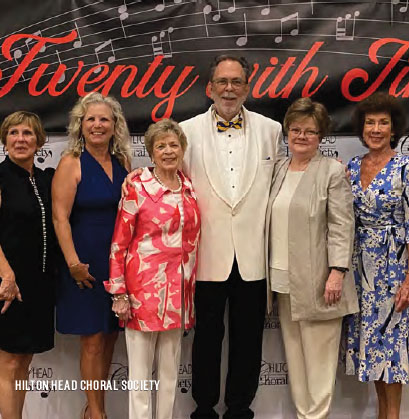 The Hilton Head Choral Society held a farewell dinner at Sea Pines Country Club for Artistic Director Tim Reynolds, who retired after 20 years at the helm of the Choral Society. In attendance were HHCS members past and present and friends. The farewell dinner planning committee consisted of Phyllis Duffie, Margie Lechowicz, Judy Tiano, Tim Reynolds, Janice Creech and Madonna Muller.

The Foundation for Educational Excellence recently received a contribution from the Rotary Club of Okatie for its 2022-23 fall grant awards. Each year the Foundation gives innovative educational grants to teachers and schools throughout the Beaufort County School District.

A new oyster reef along the 18th fairway of famed Harbour Town Golf Links —on the banks of Calibogue Sound—is a joint effort of The Outside Foundation, The Sea Pines Resort and The South Carolina Department of Natural Resources. More than 700 bags of oyster shells, each weighing about 20 pounds, were transported to the shoreline then put in place at low tide. Several local groups pitched in, including members of Hilton Head Boy Scout Troop 222. The bags created a man-made reef that will serve as a habitat for larval oysters, where they can attach and grow.

The Hospital Auxiliary presented $20,000 in nursing scholarships to USCB. The scholarships are intended to attract new students and help address the shortage of nurses in the Lowcountry, a news release said. During the past 30 years, the Auxiliary has donated over $850,000 in scholarships through proceeds from its Annual Hospital Auxiliary Invitational Golf Tournament held in November at Harbour Town Golf Links and Wexford Golf Club.

The Town of Bluffton accepted its first donation for one of its three newly established charity funds. Bluffton resident Samantha “Sam” Boyd gave $20,000 to the Bluffton Police Department Benevolence Fund, with $10,000 earmarked specifically to better equip Bluffton’s K-9 program. The remaining $10,000 will be used for miscellaneous police programs.