On the heels of completion of the 2020 U.S. census, Beaufort County launched its decennial initiative to redraw district boundaries, an effort driven by statistical analysis, guided by legislative statute and informed by public opinion.

The task of redrawing Beaufort County’s 11 districts fell on the shoulders of Daniel Morgan, the county’s director of mapping and applications. “This is my third (redistricting),” Morgan said. “At least I had the experience of doing the past censuses. We went back to historic data and looked at 2010. That was our baseline.”

Federal law stipulates that districts must have nearly equal populations and not discriminate based on race or ethnicity. Boundaries must also be as contiguous and compact as possible and keep communities of interest in their entirety.

The county established a target of 17,011 residents per district based on the new census data. A variance of up to 5% in either direction was allowed, explained Chris Ophardt, Beaufort County public information officer.

With census data in hand, Morgan drew the first map, logically referred to as Map 1, and it went to the county council for comment. Their feedback led to Map 2. Public comments made either online or during hearings held in November and December were integrated into the creation of Alternative 3A, the map that was ultimately approved during the Jan. 24 Beaufort County Council meeting. 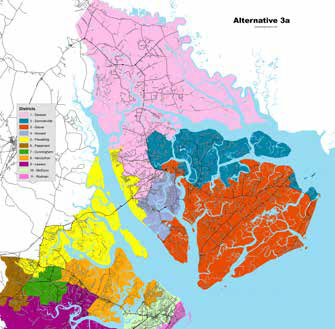 The biggest changes in Alternative 3A pertained to the historic Gullah neighborhoods on Hilton Head Island.

“When we met with a group in the Hilton Head area, some of our lines went through and split some of the Gullah communities more than they thought was needed,” Morgan said. “So, we went back to the drawing board, looked at it and tried to get it the best we could. We did pretty good.”

Of the island’s 14 Gullah neighborhoods, 12 were kept together in their entirety in District 10. Spanish Well was split between Districts 10 and 11, while Chaplin ended up entirely in District 11. District 8, represented by Councilmember Chris Hervochon, occupies a smaller portion of Hilton Head because of those changes. “The changes split (Hilton Head) into two main districts representing that island, even though Mr. Hervochon, which is District 8, still has a little bit on there,” Morgan said. “For the most part, it’s two districts there.”

Among other important changes noted by the county, the Buck Island Road/Simmonsville Road corridor in Bluffton — home to many of the town’s oldest Gullah families — became part of District 9, as did the Old Miller Road/Stony Creek community. Rugrack Road and Morrall Drive were placed in District 1, and a small portion of Baynard Road was assigned to District 5.

Population growth in the southern part of the county caused District 5 north of the Broad River to shrink. That shift cost Councilmember Brian Flewelling his seat. If he wishes to remain a member of the county council, he will have to campaign against District 4 incumbent Alice Howard, who is up for re-election this year. As of press time, neither candidate had announced formal plans to run in November.

Councilmember Joseph Passiment lost his seat in District 6 and will need to seek election in the District 5 seat vacated by Flewelling to remain on the council. District 6 is without representation under Alternative 3A. New representation will be determined in the November 2022 election.

Candidates can begin to file for participation in the November election at noon on March 16.

Census data is typically delivered in April, and the final approved maps are due to the state the following March. The 2020 data was delayed until August, but the March 2022 deadline remained in place, resulting in an abbreviated timeline.

“Even though it was a condensed timeline, it really was an open process,” Ophardt said. “We had three public meetings. The website went live on the 24th of November and was open through January. I think we got 30 online comments.”

Residents can visit the county’s website, beaufortcountysc. gov, to find their district and representative. New voter registration cards will be mailed to residents who have changed districts.