Second Helpings is a nonprofit organization that works to eliminate hunger and reduce food waste in the Lowcountry by partnering with food donors and agencies that distribute food to people in need.

A United Way Agency, Second Helpings is the only food rescue organization serving Beaufort, Jasper and Hampton counties. The organization is celebrating 30 years of service and recently welcomed a new executive director.

Former executive director Lili Coleman has retired, and Marcus Tanner has stepped in to take her place. 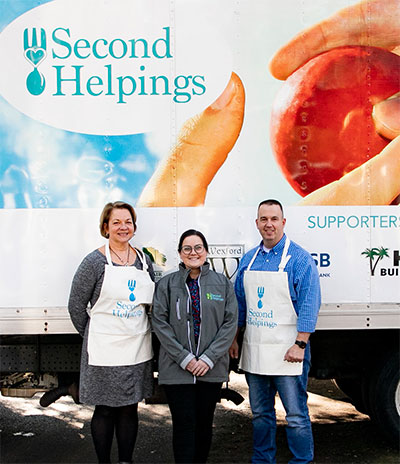 Tanner retired in October 2021 after 27 years in the U.S. Marine Corps. He held many roles in the Marine Corps, including: infantry platoon commander; company commander; recruiter; mission assurance program manager; chemical, biological, radiological and nuclear defense officer; special projects/program director; operations officer/chief and public affairs chief. He has been deployed to Iraq, Afghanistan, and various countries in Africa and the Mediterranean. He has been stationed all over the U.S., including at the Marine Corps Air Station Beaufort from 2017 to 2019.

Tanner is happy to be back in the Lowcountry. He and his wife, Stephanie, along with their two children, moved back in July. They loved the area so much when they were stationed in Beaufort that they had hoped to one day make the Lowcountry their permanent home.

When Tanner saw the job opportunity listed on Indeed, he knew he had to apply.

“I could not be more blessed to be a part of this organization,” he said. “From the very minute I saw something about Second Helpings, it was just a feeling that I had that it was an amazing organization.”

Tanner is enjoying his role as executive director, which allows him to witness firsthand the impact that the organization has on the community.

He said many people don’t realize the level of community support the organization gets. Most of the group’s 300 volunteers pick up food from donors, such as grocery stores, and deliver it to agency partners. Others organize food drives, pack food for Hilton Head Island workers traveling back and forth to work on Palmetto Breeze buses, serve on board committees, or help with office and administrative tasks.

The donors give away food that is close to its “sell by” date or that they have in excess. Second Helpings delivers that food to its 50 agency partners, including soup kitchens, food pantries, homeless shelters, senior centers, shelters for victims of domestic violence, and Boys and Girls Clubs. Thanks to the partnerships, Second Helpings can deliver 3 million pounds of food every year.

“The people in this community have really banded together to make this happen,” Tanner said.

He said Second Helpings can always use more volunteers. Individuals who would like to donate their time should visit the organization’s website, click on the “Get involved” tab, then select “Volunteer” to fill out a volunteer form.

The organization plans to expand some of its programs and reallocate resources to the areas of the Lowcountry with the greatest need. To do that, Second Helpings needs even more volunteers. Tanner is looking for volunteers to visit local agencies and food donors to find out how to make a bigger impact.

Tanner said he has two goals every day — to find joy in a world filled with tragedy and to be intentional in everything he does.

“If we do stop and take time to really see, hear and talk to our fellow neighbors, I think that will really make all the difference in the world,” he said.

For more information or to get involved with Second Helpings, visit secondhelpingslc.org or call 843-689-3689.