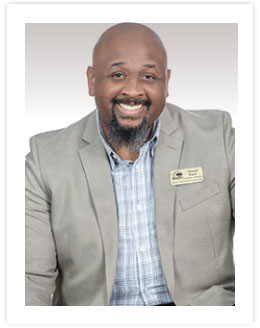 Ahmad Ward is a man of vision and planning. As the executive director of Hilton Head’s Historic Mitchelville Freedom Park, Ward received the prestigious Southeast Museum Conference 2021 Museum Leadership Award. That recognition comes, in no small part, from his ability to envision the enormous potential of Mitchelville and develop a plan to realize that potential.

“It’s definitely an honor to be recognized by your peers,” Ward said. “Sometimes you don’t think people are seeing your work. Let me tell you, sometimes leadership can be a thankless job. But nonprofit leadership, oh man, sometimes it feels like nobody sees what you’re doing. It was really cool they acknowledged the work that we’re trying to do at Mitchelville and in the field in general.”

Given Ward’s vision, it’s especially ironic that his career path and his position at Mitchelville were due in large part to a couple of happy accidents.

A native of Elizabeth City, N.C., Ward earned an undergraduate degree in art from Elizabeth City State University, where he also earned a minor in business administration. After graduation he found himself less than thrilled with the prospect of teaching art. He quips that he was “dangerously close” to becoming a professional photographer before an advisor suggested he look at Hampton University’s museum studies program. Intrigued, Ward took the one-hour drive north and soon enrolled in the program.

“I was maybe going to go to an art museum,” Ward said of his post-graduation plans. “I ended up in a history museum. I always liked history, but didn’t think I was going to spend my whole career so far in history museums. But that’s what happened.”

That history museum was the Birmingham Civil Rights Institute where he spent 18 years. For 15 of those years Ward ran the education department there and spent countless hours in the one place he once avoided – the classroom.

As Ward prepared to leave his position in Birmingham, he was considering a career change when fate once again intervened. Ward’s mother-in-law, who is also in the museum field, passed along a job lead from an institution that had to that point escaped his notice, Historic Mitchelville Freedom Park.

“I couldn’t believe that I had never heard of Mitchelville based on the work that I had been doing,” Ward said.

After more than four years as executive di rector at Mitchelville, Ward was recognized for his leadership of the institution by the SEMC.

Strategic leadership and dedication to upholding the mission of Histor ic Mitchelville were noted in Ward’s award nomination letter as key attributes that he brings to his role as executive director. His work developing and implementing the site’s master plan that will recreate the historic town as an interpretative site were noted as important factors in his nomination.

Support for his nomination for the SEMC award came from colleagues in the field.

In her letter nominating Ward, Natalie Hefter, vice president of collections and interpretation at the Coastal Discovery Museum, said Ward’s “expertise is invaluable to the community, and his achievements (past and future) at the Mitchelville Freedom Park will ensure that the Mitchelville story stays in our community for the future.”

At home Ward spends time with his wife and two teenage daughters.

He still draws occasionally, but is more likely to be cooking, watching sports, or pursuing another passion — fantasy football. He’s been playing with friends for about 20 years.

“We don’t play for money, only bragging rights,” said Ward, who earned nine straight wins to get into the championship game for the first time in six years. Unfortunately, Ward’s streak of good luck came to an end, and he lost that title game.

For Ward and Mitchelville, the future is bright.

“I think we have some really good opportunities to do some really impactful things,” Ward said. “We want to continue to do programs for young people. I try to make sure that we are providing a resource for them so they learn about their history and make some connections to other things as well. We hope we are impactful. We hope that we can be a solid source of interest and history for the region.”