Like a car left at the side of the road, plans for realigning the Buckwalter and Bluffton parkways intersection sit idle, awaiting a jump start.

Plans and proposals for the roads have advanced in fits and starts for more than 15 years.

After a burst of activity in the fall — including a public hearing attended by more than 100 area residents — the much-studied initiative was set aside by a committee of the Beaufort County Council.

Instead of advancing any plans to the full council, members of the Public Facilities Committee agreed to stand down and ask Bluffton town officials to stipulate how, when and whether they would like to proceed.

In a free-wheeling discussion, county committee members initially considered a proposal to “shelve” the project, before agreeing to “punt” the matter to the town.

“I think there are way, way too many questions, too many variables — whether it’s from funding, which options, who is pushing it, what the neighborhoods think and what’s the ultimate goal of the project,” Cunningham said in a video report to constituents.

Jared Fralix, assistant county administrator for engineering, said the overarching goal is to adjust the parkways to accommodate increasing amounts of traffic and development for safety, efficient flow and smart growth.

Traffic continues to increase on the parkways. A 2009 study of the Bluffton Parkway showed average daily traffic flow of 8,548 vehicles. By 2018, volume grew to 14,623, a study showed.

The challenge can be met in either of two ways, Fralix said: By being proactive in designing plans to guide growth and activity, or by taking no action and reacting to future conditions.

The county has developed a fistful of options that range from tweaks to a wholesale overhaul and expansion of the parkway system.

From removing the dogleg between the two parkways to extending the parkway system, the process is complicated, controversial and costly.

The October public hearing was heavily attended by homeowners asking whether the so-called 5B project to extend the Bluffton Parkway to Buck Island would slash through empty property at the Woodbridge, Townes and Rose Hill communities.

Depending upon an alternative ultimately approved, costs could range from $2.5 million to some $10 million, officials estimate.

For now, the county is limiting its focus to an access management study of the Buckwalter Parkway between Fording Island and the Bluffton Parkway intersection. The study is limited to county-managed property and is intended to examine traffic signals, traffic volume and the impact on safety and traffic flow.

Bluffton Mayor Lisa Sulka said the town is discussing how to proceed, now that the county has limited its activity. “We are in the process of responding to the request from the county and want to set up a time for both governments to meet,” she said.

She said the town “several years” ago put money toward parkway realignment and has plans that show options for the change and also allowing easy access for the neighborhoods that would be affected.

An essential next step, she said, is to “sit down and discuss our issues face-to-face and, hopefully, getting town and county staff and elected officials to go over what we all can agree on will get us back on track.” 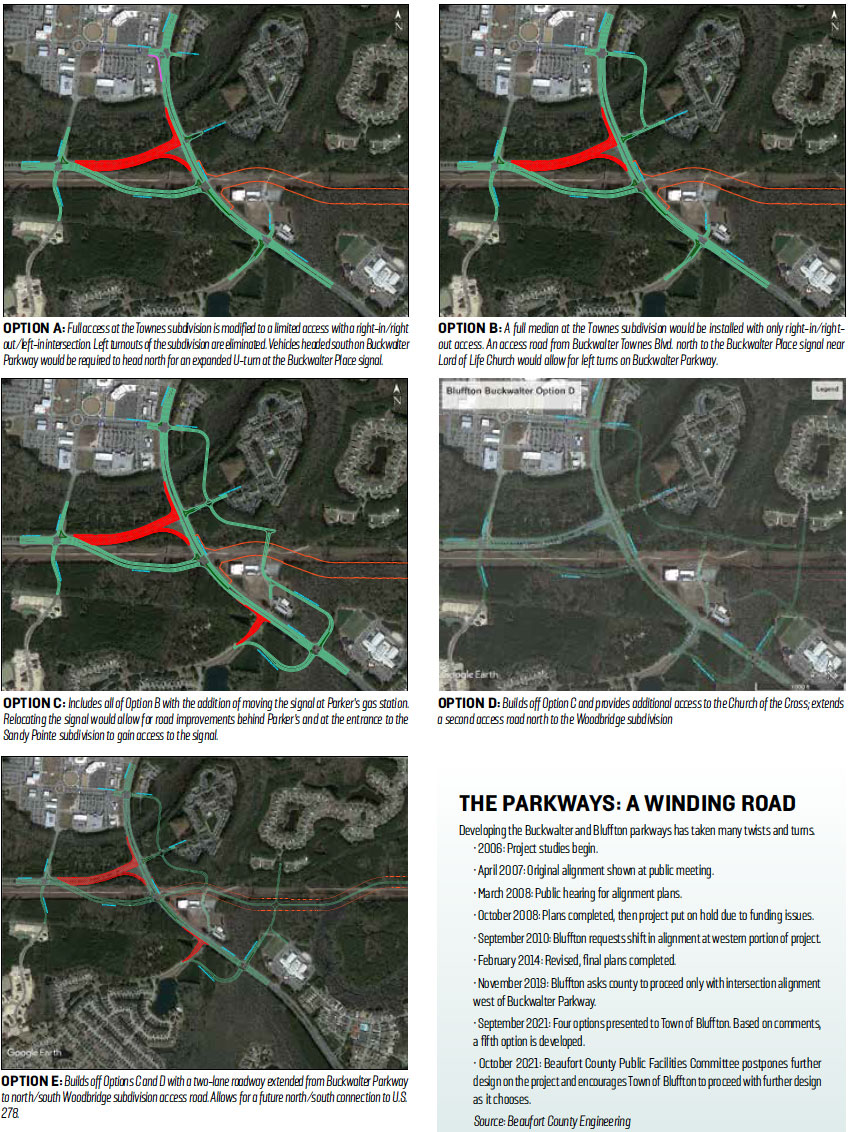 THE PARKWAYS: A WINDING ROAD

Developing the Buckwalter and Bluffton parkways has taken many twists and turns.