The baseball field is his sanctuary. The crack of the bat. The thwack of the ball hitting a glove. The smell of fresh grass.

Playing catch with his son or coaching the Bluffton community’s kids is what Gustavo Gomez savors. He enjoys analyzing projected lineups and teaching the basics of fielding and hitting.

He cherishes the chatter, the cheers, the camaraderie.

“It satisfies me to see a kid play well — or get their first hit,” he said. “It tells me the coaching we do helps them.”

Gomez spent nearly 27 years in the U.S. Marines. He served in Iraq and Afghanistan. He visited morgues. He counted casualties.

After years in the military Gomez began experiencing nightmares. He’d couldn’t sleep. Gomez would lash out at his family. He’d be angry. He’d be argumentative. He’d drink too much. “For me, I was one of the guys who had PTSD but didn’t know I had it or didn’t understand it,” Gomez said.

Gomez wasn’t sure what was wrong, but he knew he needed help. He knew something had to change. Gomez did receive help and was diagnosed with post-traumatic stress disorder in 2010 after serving in Afghanistan, but still his head was filled with noise. He needed a respite, something to distract his mind from dark thoughts. 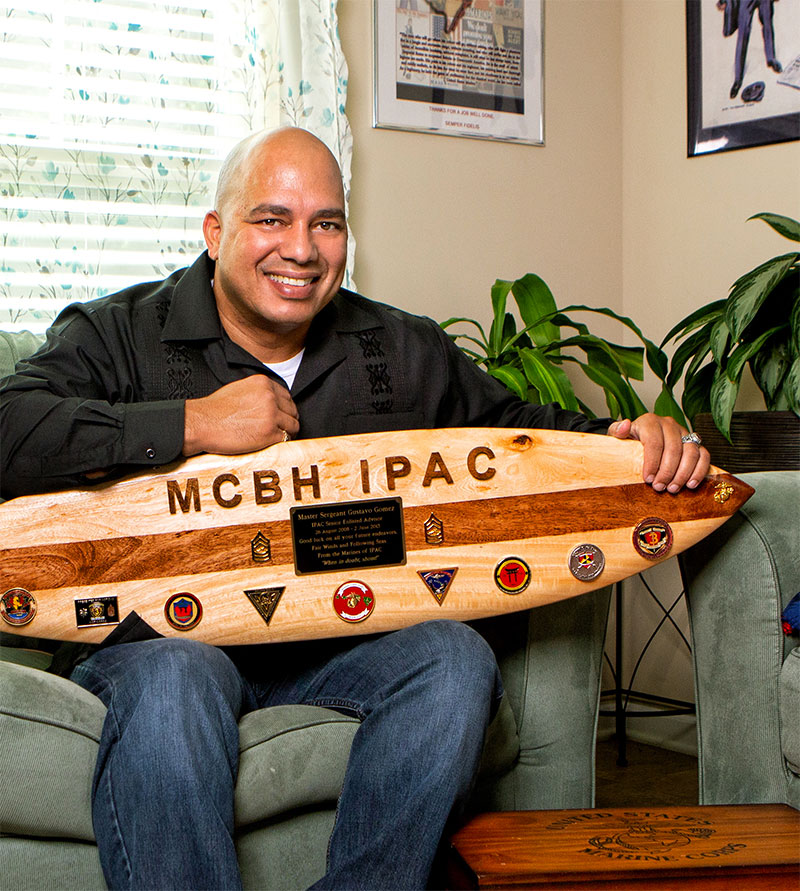 He grew up in Caguas, Puerto Rico, a town that produced Major League Baseball standouts such as Alex and Joey Cora and Francisco Lindor.

As a child Gomez looked forward to when the big leaguers would visit for spring training and the winter league in Puerto Rico and volunteered to hold clinics in his hometown.

“We looked up to those guys,” he said.

After moving with his family to Newark, New Jersey, when he was 15 years old in 1986, Gomez, who said he learned to speak English a year after arriving in Newark, focused on school and work. His father, a former police officer in Puerto Rico, instilled his son with discipline.

Gomez worked three jobs: at a car wash, cleaning dishes at a restaurant and at a bodega.

Growing up he heard stories of relatives who served in World War II and the Korean and Vietnam wars. He was fascinated with the military. Gomez planned to join the Army, but the recruiting office was closed when he visited that Saturday in 1990. Instead, he met a sergeant (“a big dude”) from the U.S. Marines who invited him to learn more. Gomez was hooked — and ready.

“With the work ethic my dad instilled in me, when I went to the Marines, I was like, ‘This is gravy, I am going to make it here,’ ” Gomez said.

Gomez, who went to boot camp in Parris Island in March 1991, reveled in the leadership opportunities and building relationships. He served with the First Marine Division, headquartered in Iraq, in 2003 during the Iraq War from February to June.

In Oct. 2009 he was deployed to Afghanistan where he served with the Regional Command- South International Security Assistance Force until Nov. 2010.

He was originally charged with being a casualty officer.

“Every time somebody died, I’d do a report,” Gomez said.

He visited morgues and hospitals. For two months Gomez dutifully chronicled the casualties, which averaged 50 members of the ISAF killed in action, plus hundreds more wounded per month.

“My mind was going crazy,” he said.

Gomez switched tasks and was assigned as an interpreter manager for the Kandahar area of operations.

He oversaw 45 interpreters, which helped him learn the Afghan culture and interact with their population to accomplish the mission, he said.

While in Afghanistan, Gomez was scrolling through the internet when he saw an article about the best places to retire in the Lowcountry. He read about Bluffton and made a note. After a stint in Hawaii, Gomez and his wife relocated to the Lowcountry in 2013 on military orders, where he was assigned to Parris Island as the assistant inspector general. Soon his young son, Gustavo Gomez Jr., who has been coached by his father since he was 4 years old, began to play baseball in Bluffton, and Gomez decided to volunteer. He enjoyed it so much, the next year he coached some more.

He noticed something: The nightmares were less frequent. He was less irritable. Gomez found his mind thinking about the upcoming games, the practices, and teaching kids the fundamentals.

“In my case, it instantly happened, combined with counseling through the VA,” said Gomez, who retired from the U.S. Marines in 2017. “Who’s pitching, who’s catching? I had a plan. I would send baseball instructional videos to kids to practice. That helped me.”

Gomez has volunteered as a coach with Bluffton Youth Sports and H.E. McCracken Middle School.

He said his mental health has benefited from coaching.

He encourages veterans to get involved in the community.

“I believe a lot of veterans are very proud, they don’t want to seek help. They think they are invincible and when they don’t get that help, they fall into deep hole, which is too late to pull out of,” said Gomez, who noted he’s lost four friends to suicide since he retired.

But baseball has offered Gomez solace. He’s devoting more time to following his son’s progress on the field.

Gomez Jr., is a freshman at May River High School.

Gomez plans to continue to volunteer as much as he can at Bluffton Youth Sports. He’ll continue to relish his time at the field.

“You are out there helping the community,” he said. “Your mind will focus on something else. Now you are a better person, and you’ll see the kids develop. It’s amazing to see the kids grow. I really like that.”