Born and raised in Ridgeland, Peeples spent a lot of time on Hilton Head as a young boy. His parents bought property on the island in the early 1950s, before there was a bridge to the mainland.

“My dad had to have ferried over all the materials to build on Hilton Head,” Peeples said. “He was not a builder, but he was a do-it-yourselfer. … Every time we’d go over there, you know, the kids all wanted to have fun and go to the beach. Dad went straight to work.”

Tom’s wife, Mary Ann, also grew up in Ridgeland, so the two had known each other their whole lives. When Tom was a sophomore at the University of South Carolina Beaufort, he and Mary Ann started dating, and after just 15 days together, he popped the question.

Since Tom was only 20 and Mary Ann was 17, by law at that time, they had to get their parents to sign off on the marriage. 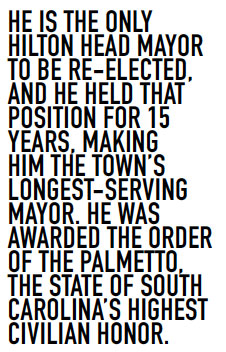 They were married in June 1973 and moved to Hilton Head that same year.

The following year, Tom was on a construction site on Hilton Head when he fell off a condo building and broke his second, third and fourth vertebrae. He had to wear a metal brace and was laid up for about seven months.

At the time, Tom was working for a close family friend, his “unofficial godfather,” Paul Holmes. Holmes was also a volunteer with Hilton Head’s rescue squad, so he drove Tom to the hospital in the ambulance.

Almost 50 years later, Tom still gets a little choked up talking about the incident.

“I remember there was a guy who was a plumber,” Tom said. “He wouldn’t let anybody touch me. … I really think he kept me from getting even more hurt.”

Thankfully, Tom made a full recovery and had no permanent damage.

In 1978, he launched his business, Tom Peeples Builder. Over the years, he built about 500 homes. He was named home builder of the year by the Hilton Head Area Home Builders Association three times.

Tom’s business was far from his only success. He was elected to Town Council in 1989 and was elected mayor in 1995. He is the only Hilton Head mayor to be re-elected, and he held that position for 15 years, making him the town’s longest-serving mayor. He was awarded the Order of the Palmetto, the State of South Carolina’s highest civilian honor.

Tom said his greatest accomplishments as mayor were getting sewer access to unserved areas of the island and the Town’s purchase of about 1,100 acres of land.

“It was very important — and it still is —for the Town to buy and own properties,” he said. “One of the things we did was really attack the oceanfront property so we could leave a place for locals to go, and I think that’s really important. For everybody to go, but mostly the locals.”

Long before Tom took office, he and Mary Ann were active in the community. He was a member of the Rotary Club of Hilton Head Island and a board member of the Home Builders Association.

Mary Ann was named volunteer of the year by the Beaufort County School Board. When the Peeples’ son, Josh, transferred from public to private school, she led the booster club at Hilton Head Preparatory School.

Mary Ann sat on the boards of Hargray Caring Coins Foundation and the Coastal Discovery Museum. The museum honored her by naming a pavilion at Honey Horn after her.

Together, the Peepleses ran a youth football program and assisted with a youth baseball program on the island. They continued supporting the youth by helping build the football stadium at Hilton Head High School, under the leadership of Sonny Graham and others.

Tom and Mary Ann agreed to take a year off from volunteer work to do some of the things they haven’t had the freedom to do. They’re looking forward to traveling more, especially to visit Josh and their 11-year-old granddaughter, Eloise, in Napa County, Calif. They will also spend time at their home in the North Carolina mountains and on the small island they own in Jasper County.

But rest assured – they will be back.

“We love Hilton Head, and Hilton Head has been very good to us,” Mary Ann said. “We’ve enjoyed serving it.”