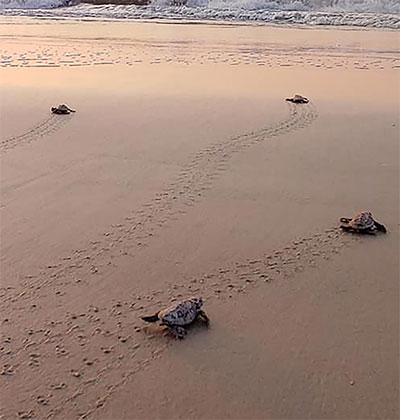 Some island folks consider May the start of the most exciting time to be on Hilton Head Island. That’s when the water temperature reaches 70 degrees and the seaturtles, mostly Loggerheads, come ashore to nest and lay their eggs along the island’s 14 miles of beach.

With this official start of the sea turtle season, every mor n ing doz ens of volunteers will patrol the beaches until the end of the hatching season, which lasts from July through October.

The sea turtles are federally protected by the Endangered Species Act. With flippers instead of feet, the sea turtles move gracefully through the water and come ashore only to nest. Their massive skull and body can weigh up to 400 pounds. Mother turtles will nest four to six times in one season.

Loggerheads nest at night to avoid predators and overheating in the summer sun, selecting a site above the high tide line. The Town of Hilton Head protects the Loggerheads by requiring residents along the beach to turn out lights or shield them from the beach from 10 p.m. to 6 a.m.

Beach goers play an important part in the successful nesting and hatching of the sea turtles on Hilton Head’s beaches.

Marked nests should always be undisturbed. Leave only your footprints on the beach. At the end of the day, sandcastles should be flattened, all holes filled and trash removed.

Nothing should be left on the beach.

If you do encounter a nesting turtle, do not shine any lights or use flash photography. Stay behind the turtle so that she cannot see you, and observe from a distance. Never harass a turtle. Use red flashlights instead of white.

Each morning during turtle season, the volunteers of the nonprofit Sea Turtle Patrol HHI drive along the island ’s beaches, searching for Loggerhead tracks and new nests. They are state-certified to manage and oversee all things sea turtle.

Each nest location is marked using GPS, with information entered into the SCDNR electronic data base. Poles and tape are placed around each nest.

A network of Turtle Trackers is also out on the beaches each morning, clearing debris, checking nest markings, informing the public and protecting the turtle nests. Last year, 291 nests were marked with an estimated 23,700 turtles hatched and returned to the sea.

Visit the Sea Turtle Patrol website by using the QR code found on the beach signs or go to seaturtlepatrolhhi.org for information. To support the Sea Turtle’s Patrol’s efforts, complete a Nest Dedication form on the website. One hundred percent of the donation goes to nestmonitoring efforts.

The most important thing you can do to protect the sea turtles is to turn the lights out.

Amber Kuehn is the director of Sea Turtle Patrol HHI.