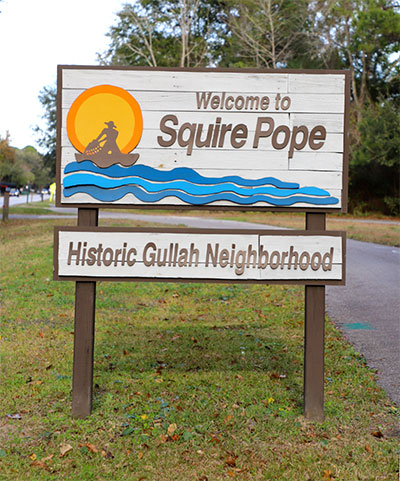 Over the last decade or so, native islanders have made huge strides in making their story a part of the narrative told about the history of Hilton Head Island. The century between the retreat of the plantation owners and the invasion of the golf course designers, we now know, represents a singularly unique era in the island’s history.

This was the age of the native Gullah. Freed from bondage, they carved out their own world on Hilton Head Island, with communities built on a foundation of family. Each formed around its own nucleus — you’d find a praise house, markets, restaurants, and eventually nightclubs that hosted some of music’s biggest names.

And they’re finally getting the recognition they deserve. But it didn’t come until recently, with the erection of signs dotting the islands marking where these historic communities once thrived.

“These neighborhoods represent Hilton Head Island after the Civil War,” said Murray Christopher, who was instrumental in getting the signs built. “These were the communities that remained viable, so it’s equally important that they be part of the history of Hilton Head.”

Especially now, at a time when the constant march of change threatens to wipe away the memories of what these communities once meant. Born in 1948, Mary Stuart lived in Stoney, a neighborhood built around a cluster of grocery stores and a small schoolhouse on Squire Pope Road. She remembers watching logging trucks rumble by her home, carrying away trees grown on land now destined for golf courses.

And Stoney was her world. Her family would work the waters to pull up shrimp and oysters. She would work in the tomato fields of what is now Hilton Head Plantation, picking vegetables for a few dimes a day. And except when the school bus came to pick her up, she never ventured beyond Stoney.

“There was a lot of the island we never saw,” she said.

She lived in a period of extraordinary change for her neighborhood, as Stoney’s status as the “downtown of Hilton Head Island” greeted more and more visitors with each passing year. Growing up in Chaplin in the 1970s and 1980s, native Carolyn Grant saw the same.

“We kind of knew things were changing,” she said. “We saw the highway being widened, we noticed more cars coming back and forth. So, we sensed that there were more people coming to the island. But… we were too young to understand what exactly does this mean.”

The island of her youth was one where the divisions between isolated neighborhoods were blurring.

Her family would travel between them on any given Sunday when church services rotated among the various neighborhoods.

She went to elementary school with kids across the island, a far cry from the single room her father had attended in Chaplin. And on weekends, everyone came to Chaplin.

“Chaplin was the destination for a lot of African Americans coming to the island, because people wanted to go to the beach,” she said. “We knew Easter Sunday was the opening of the beach season. Literally every Sunday that beach packed with people going to Singleton Beach.”

It’s a sentiment shared by Christopher, who also grew up in Chaplin.

He describes it as quiet, “except on weekends when the beaches were in full swing. Other than that, it was a quiet neighborhood. It was a great place to be.”

Directing attention to the boundaries of historic Gullah neighborhoods is about more than just getting this underexplored era into the history books.

It comes as cultural tourism comes to the forefront of the island’s overall economic dynamic, giving the Gullah a chance to welcome visitors drawn by their stories.