Here’s a fun exercise if you ever feel like breaking the law in the stupidest way possible: make your way up S.C. 46 as it winds away from Old Town toward Savannah with three sticks in your hand. As you travel, place the first of the sticks across Buck Island Road. Place the second stick across Haigler Boulevard and the third across Crooked Cove Lane.

Congratulations, you are now a renegade outlaw. Kind of.

With your first and third sticks, you have violated Town of Bluffton Ordinance Sec. 22-32 prohibiting placing sticks or other hazardous items on roadways. Your second stick is fine, though, because unlike the other two it resides in one of Bluffton’s many “donut holes.” As a stick residing in unincorporated Beaufort County, it hasn’t technically violated any laws.

The strange case of Bluffton’s “Donut Holes” (technically “jurisdictional fragmentations” if you want to get really nerdy with it) came about when the town began its expansion of the last few decades from the one square mile of Old Town outward.

Perhaps the greatest example can be found around Buckwalter Parkway, where a massive tract of land was sold off parcel-by-parcel by original owners Union Camp prior to annexation.  Because of this, you have the Willows, Grande Oaks, Edgefield and Sandy Point bloc of neighborhoods outside of Bluffton, yet surrounded by Hampton Hall and Hampton Lake which are inside Bluffton.

As the town grew through annexation, odd stray parcels here or there remained as part of unincorporated Beaufort County due to a quirk in state law making it illegal for the town to proposition property owners on whether they would want to be annexed. Want in? All you have to do is ask.

“By law, a property owner or neighborhood has to petition the town to be annexed within town limits,” Szpanka said.

Exacerbating the situation is the fact that residents of these donut holes might not even realize the live within one.

Eliminating these donut holes would not only make it easier for the Town of Bluffton and Beaufort County to enforce codes and laws, it would also bring a slew of benefits to the residents of those donut holes.

“There are multiple reasons why a citizen of one of these donut holes would want to become a citizen of the Town of Bluffton,” said Szpanka. Chief among them, she notes, is a bigger voice.

As a donut-hole-dwelling Blufftonian, you don’t get a voice on town council, and you also don’t get the services of a dedicated police force or trash pickup. Sure, you’re going to see a slight increase in taxes, but if you’re paying for private trash pickup, that alone makes it a wash.

Plus, and this is crucial, if some ne’er-do-well drives by and places a stick in the road in front of your home, you’ll know exactly what law they’re breaking.

(NOTE: Monthly magazine does not condone the act of illegal stick placement on roadways, and must insist that readers do not attempt such heinous and illegal acts). 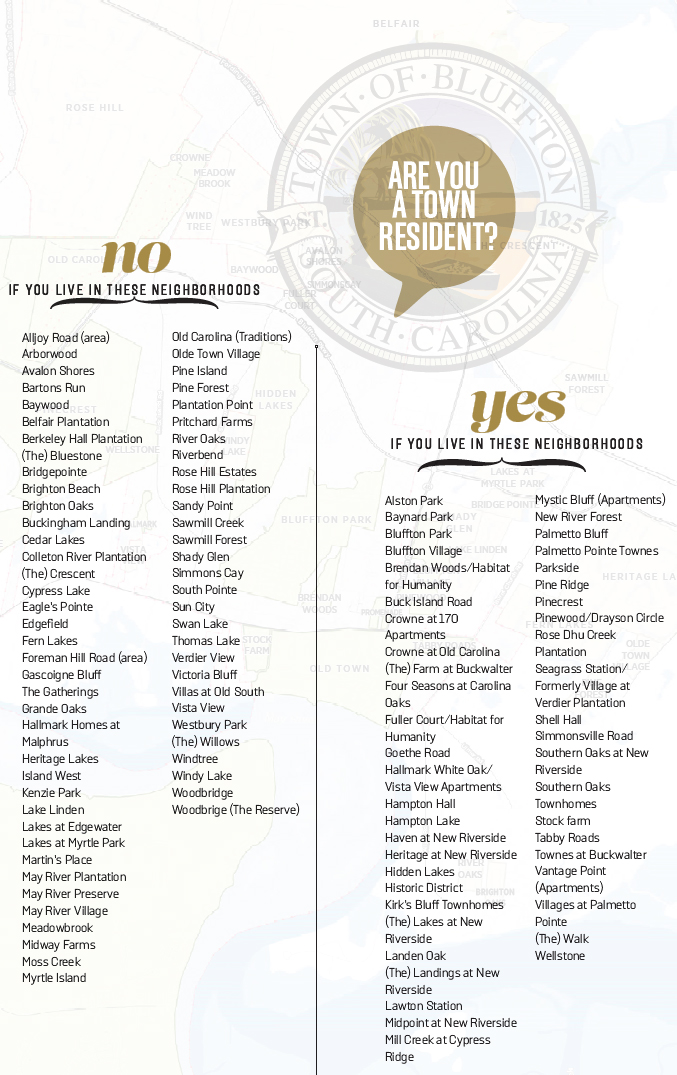