Local voters will help determine the outcome of a pair of races closely watched across the country on Nov. 3, as Sen. Lindsey Graham pushes to stave off Jaime Harrison. Congressman Joe Cunningham, who in 2018 became the first Democrat since 1981 to represent the 1st Congressional District, is trying to hold on to the seat in a contest with State Rep. Nancy Mace. Voters will also have a long list of state and local races to determine.

The following candidate profiles and photos are drawn from responses to questions from the League of Women Voters’ Guide (vote411.org), Ballotpedia (ballotpedia.org/Main_Page), SCStatehouse.Gov, and candidates’ websites. For more information, visit the League of Women Voters’ hub on its website. For a sample ballot specific to your district, visit scvotes.org and click “Get My Sample Ballot.”

Graham, 65, came into the fall facing a serious challenge from Harrison. Entering September, national polls show Harrison either tied or just a few percentage points behind Graham. South Carolina last sent a Democrat to the senate in 1998.

Graham, a vocal supporter of President Donald Trump, became a Senator in 2002. Before that, he was in Congress. Harrison, 44, an Orangeburg native, graduated from Yale University and Georgetown Law. In 2013, he became the first African-American to chair the South Carolina Democratic Party. 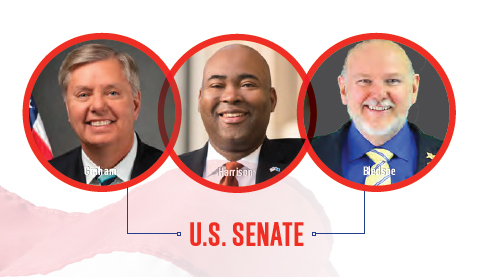 Cunningham’s win in 2018 helped the Democrats retake the House. Cunningham, 38, serves on the House Natural Resources Committee and the House Veterans' Affairs Committee. Prior to his election to Congress, Cunningham, of James Island, was an attorney and an ocean engineer. 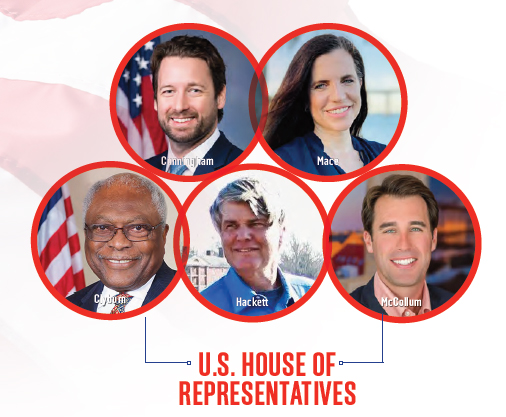 Clyburn, 80, has represented this district since 1993. As Majority Whip, he is the third-ranking Democrat in the United States House of Representatives.

McCollum, 35, told the League of Women Voters that if elected his job would be to “lobby for funding to facilitate improved infrastructure, and increased access to quality healthcare and education.”

Hacketthas been involved in the Constitution Party since its founding, according to his Facebook page.

District 43: Incumbent George “Chip” Campsen III is facing challenger Richard Hricik (D). In the senate for 15 years, Campsen is chairman of the Fish, Game and Forestry Committee. The businessman and attorney also serves on the Agriculture and Natural Resources; Judiciary; Legislative Oversight; Rules; and Transportation committees.

Hricik, a 53-year-old lawyer, said on his website that the state’s biggest problems are: schools, the COVID-19 pandemic; and rising floodwaters.

District 45: Incumbent Margie Bright Matthews (D) is facing a challenge from Republican Rodney Buncum. Matthews, an attorney, has been a state senator for five years. She is on the following committees: Corrections and Penology; Family and Veterans’ Services; Judiciary; Medical Affairs and Transportation.

Buncum,a pastor,said on his website that his priorities are economic literacy, education, infrastructure, conservation and public safety. 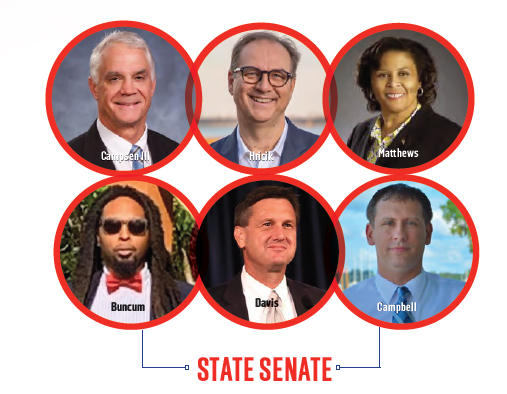 District 118 (Beaufort, Jasper): Incumbent Bill Herbkersman (R) faces Democrat Mitchell Siegel. Herbkersman, a developer, has been in the legislature for 17 years and serves on the Ways and Means Committee.  Retiree Siegel (D) told Ballotpedia that education must be addressed; that healthcare access should be universal; and that everyone should have access to jobs and housing.

District 120 (Beaufort): Incumbent Weston Newton,an attorney, is running unopposed. The seven-year state representative is chairman of the Legislative Oversight Committee and a member of the Judiciary Committee.

District 121 (Beaufort, Colleton): Incumbent Michael F. Rivers Sr. (D), a minister in the legislature since 2017, is on the following committees: Agriculture, Natural Resources and Environmental Affairs.  Eric Erickson is a Republican who lives in St. Helena, according to his election filing form.  He opened a law firm in Beaufort in 1998, according to his website.

District 122 (Beaufort, Hampton, Jasper): Incumbent Shedron D. Williams (D), who was elected in 2018 and has a background in public health, serves on the Medical, Military, Public and Municipal Affairs committees. He faces Republican Ashley Lawton who says on her Facebook page that she is about Christian values, honesty and integrity.

District 123: Incumbent Jeff Bradley (R) faces Democrat Christine deVries. Bradley, a financial advisor, cited three priorities for the League if he is reelected. Having held the seat for six years, Bradley said he wants to focus on: infrastructure, federal stimulus expenditures and pension reform. DeVries (D), a consultant, told the League that health care, economic recovery and education are her top three priorities.

District 124 (Beaufort): Incumbent Shannon Erickson (R), a legislator for 13 years and a teacher and businesswoman, is on the following committees: Regulations and Administration; Procedures and Ways and Means. Barbara Nash (D), a nurse and professor,told Ballotpedia that she is passionate about healthcare access, cost and quality; a robust public education system; and quality air and water. 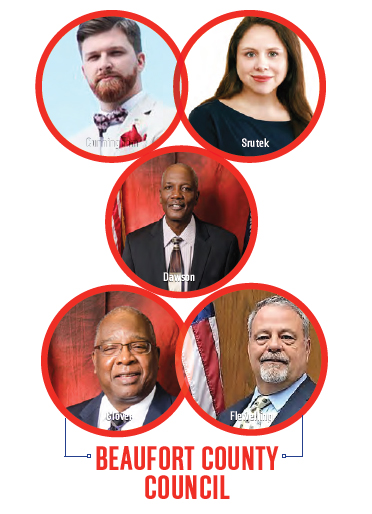 Logan Cunningham (R) will face Jodie Srutek (D) for the District 7 seat. Cunningham said on his website that he wants to improve the support of students, teachers, and facilities; would seek “increased transparency” of the various government entities in the district; explore affordable housing alternatives; and promote growth in the district as an opportunity for economic success.

Srutektold the League her priorities are: Managing the impacts of COVID-19 for the county, strategic growth management and contributing to a constructive and positive culture within the county leadership and administration. 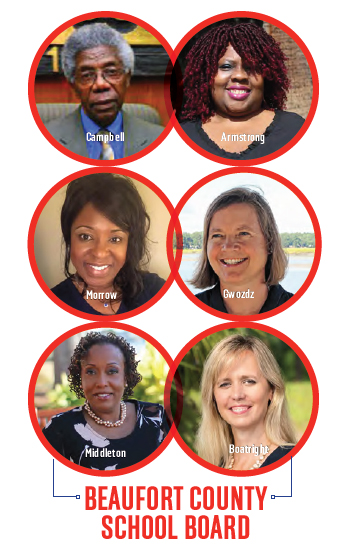 District 1 (Northern Beaufort County): Incumbent Earl Campbell is facing a challenge from Jevona Armstrong. Campbell told the League that he will focus on student achievement gaps; hiring qualified teachers and staffs; making schools safe for students; and improving discipline. Armstrong told the League her priorities are to be a liaison between parents, the schools and the school board; create more enrichment and after-school programs; and partner with businesses to create apprentices and internships for the high school students for the skilled labor industry.

District 6 (Okatie and Sun City): Angela Middleton is the only candidate. She told the League that her priorities would be: Ensuring students have the resources and the schools support to receive a quality education; providing teachers with the necessary financial and material resources and support; and supporting district administrators and staff with securing the funding and material resources needed to provide a quality education for students.

District 9 (Bluffton and Dafuskie Island): Board chair Christina Gwozdz versus Jennifer Morrow. Gwozdztold the League that her top three priorities are: Improving student achievement, recruiting and retaining high-quality teachers and increasing collaboration with the community to improve educational outcomes. Morrow said her top three priorities are student education, staff retention/recruitment and improved communication and accountability to all community stakeholders.

District 11 (Hilton Head): Ingrid Boatright is the only candidate. She listed with the League the following three priorities: School-community partnerships,  a focus on whole-child education and preparing students for the 21st century.

Ward 1: Alex Brown versus Peter Kristian. Brown is a self-described seventh-generation Native Islander. He told the League that he planned to provide carefully considered input that is “sensitive to the community’s voice.” He said he is convinced that Hilton Head can be a community that offers “a great quality of life for ALL its people.”

Kristian is chairman of the Town’s planning commission and general manager of the Hilton Head Plantation POA. He told the League that the island has a number of issues to address and that he has the “the experience, background, and education to work with my fellow council members and the mayor to bring all these challenges to a successful resolution.”

Ward 3: Incumbent David Ames, who has been on the council since 2016, is facing Tommy Reitz. Ames said in response to the League that he wants to unite the community; preserve and protect the island’s irreplaceable natural environment; bolster the economy for the benefit of residents and businesses; and enhance the “island’s reputation and quality of life.” Reitz told the League that if he is elected, he would make town residents his first priority before any decisions are made. He said he wants to ensure there is full transparency between residents, the council and the Chamber of Commerce.

Ward 6: Incumbent Glenn Stanford, who was elected to the council in 2018, is facing Kent Loper Berry who told the League that he wants “to be the “One Voice for all of Ward 6.” 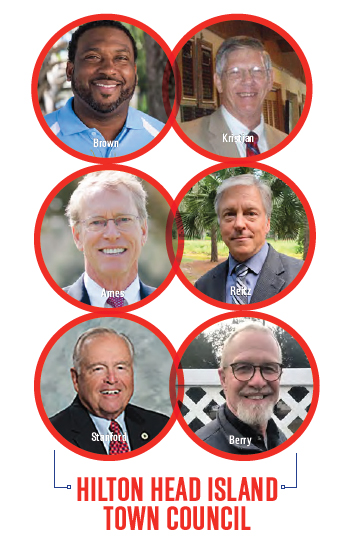