The Women’s Association of Hilton Head Island will kick off its 60th year with a “Picnic in the Park” Tuesday, Sept. 22 at the Mary Ann Peebles Pavilion at the Coastal Discovery Museum. The event is 10 a.m. to 1 p.m. The keynote speaker with be Stan Smith, a former Wimbledon and U.S. Open Champion and Hilton Head Island resident. WAHHI will also collect new medium size, simple style backpacks (black, red, or dark blue) forBackpack Buddies.

Established by the Trustees of the Rotary Foundation, the award recognizes outstanding service in the field of advocacy, fundraising and contributions to Rotary’s polio eradication efforts. 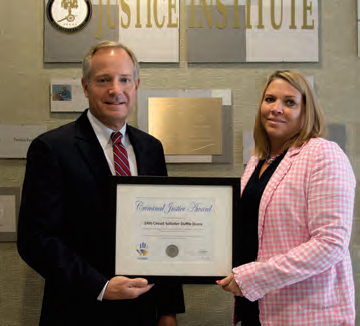 “This award is given to a member of the criminal justice system who has exemplified true advocacy on behalf of crime victims,” said Laura S. Hudson, SCVAN’s executive director.

Bluffton Historical Preservation Society said its “Digitization of the Surname and Oversize Files and Storage Project” is complete. The digitized files are available at historicbluffton-caldwellarchives.libraryhost.com/. The Caldwell Archives can also be accessed at heywardhouse.org/Archives.

BHPS was awarded a $4,096 grant by the National Society Daughters of the American Revolution in 2019. Funding was made possible through a sponsorship by the Emily Geiger Chapter NSDAR.

Visitors to the Beaufort History Museum can visit the Fort Fremont exhibit. Fort Fremont was constructed in response to the Spanish American War to defend the coaling station and dry dock at the Port Royal Naval Station located on Parris Island. It was a fortification designated to protect the Southeast coast during the war. For more information, email info@beauforthistorymuseum.com or call 843-379-3079.

SCAD students earned the top prize in the 2020 Coca-Cola Refreshing Films competition for the second year in a row. More than 100 students worked on "Let Loose," featuring live-action filmmaking and animation, according to the school. The team is led by director/writer Elina Itugot, co-director/animation supervisor Henry Zhinin, producers Ian Arnoldy and Sharlene Richards, and associate producer Olivia Schneider.