KNOW LOCAL LAWS TO HAVE A HAPPY FOURTH OF JULY

With public fireworks displays cancelled this summer, locals and visitors may be tempted to shoot off their own to celebrate Independence Day. And while nothing says summer fun like an evening of brightly colored pyrotechnics, it’s important to know and respect local laws.

Laws vary according to where you are in the Lowcountry. The Town of Bluffton prohibits the possession, sale and discharge of fireworks within town limits, according to Bluffton Police Department community relations manager Joy Nelson. Anyone caught breaking this law can receive a maximum fine of $500 and 30 days in jail, Bluffton Police Department’s Capt. Joseph Babkiewicz said.

However, much of greater Bluffton lies outside town limits and is known as “unincorporated Beaufort County.” In those areas, the county ordinance applies. That ordinance says only a licensed pyrotechnician can shoot off fireworks, and that person must have special permission from the local fire chief or the fire chief’s designee, and from the state fire marshal, Beaufort County Public Information Officer Liz Farrell said. Beaufort County Sheriff’s Office Public Information Officer Major Bob Bromage said offenders can be fined $200 or given 30 days in jail. 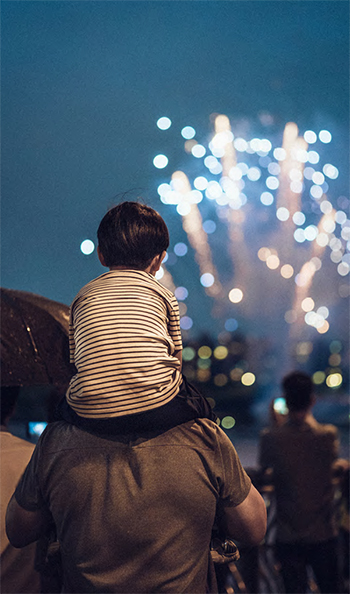 This year, it’s illegal to shoot of fireworks on Hilton Head Island beaches, which is defined as the shoreline between Fish Haul Creek Park on Hilton Head’s north end and Lands End in Sea Pines. According to Town of Hilton Head Island staff attorney Stephen Ryan, the town is not currently granting special event permits due to coronavirus. Fireworks permits are a type of special event permits and won’t be granted this year. Fines for unauthorized beach fireworks displays can be as high as $1,082.50.

As far as discharging fireworks elsewhere on Hilton Head, Bromage advises against the practice.

“I strongly discourage people from discharging fireworks anywhere in the county without a permit,” he said.

If you catch the vegetation on fire, it could spread to structures…

Town of Hilton Head Fire Rescue chief Brad Tadlock urges caution when dealing with fireworks, and encourages Lowcountry residents to reconsider setting off their own displays.

“When people buy them and shoot them off themselves, they risk injury,” he said. “Whether it be from them not handling them properly or something going wrong with the fireworks, there’s always the potential for injury.”

According to the National Fire Protection Association, thousands of people — mostly children and teenagers — are injured every July 4 while setting off fireworks.

There’s also a fire risk depending on the weather, which on the Fourth can be rather dry — the perfect setting for an accidental blaze.

“Open spaces are dry,” Tadlock said. “The pine straw is dry. Your neighbor’s roof with pine straw on it might be dry. There’s obviously a fire risk that could be damaging both to the environment and to structures.”

Tadlock said that over the years, local firefighters have had to respond to yard fires and partial structure fires caused by fireworks. They’ve also responded to several beach fires.

Tadlock said the No. 1 reason fireworks aren’t allowed on the beach is the wind. Breezes that come in off the ocean can blow fireworks back onto land or onto a building. Occasionally, Tadlock said, the wind can alter the flight of a firework, sparking a fire on the dunes.

“If you catch the vegetation on fire, it could spread to structures or land on a structure. People shoot these things up in the air; you no longer have control over it,” Tadlock said. “It’s just a recipe for problems.”