Desiree Bailey and Walter Wheeler have been side-by-side for most of their lives, growing up together in Bluffton and emerging as leaders of the Class of 2018 at Bluffton High School.

Now they’re trying to lead their hometown into a new era of social awakening, organizing several protests in support of the Black Lives Matter movement and asking town officials to change street names tied to the Confederacy and implement all of the law enforcement best practices endorsed by Campaign Zero and 8cantwait.org.

They’ve made progress on the latter, getting assurances from Bluffton officials that seven of the eight life-saving measures are in place and opening a dialogue on the eighth, and they’re determined to see South Carolina’s Heritage Act repealed, which would pave the way for changing the names of streets and monuments that serve as a constant reminder of the slavery era for people of color. Their advocacy helped lead to the Town of Bluffton recognizing Juneteenth as an official town holiday. 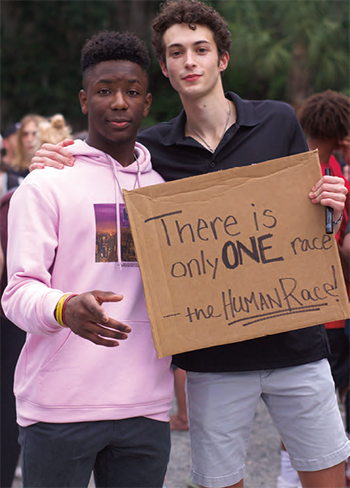 Now students at the University of South Carolina, Bailey and Wheeler sat down with Monthly recently to talk about their drive for change.

Monthly: Is this your first real foray into activism?

Desiree Bailey: No. We literally walked out senior year. I was the student body president, and our principal had conversations with me about, “Is this really what you want to do?” I think the reason we are doing it now is because we’ve been doing it our whole lives.

Walter Wheeler: We’re that generation that grew up watching Hunger Games and Divergent, so we’re definitely not afraid to stand up for what we believe in. In the student protest in our senior year after the Parkland shooting, we walked out to show that we thought schools weren’t safe.

Monthly: Can you trace your passion back to any particular moment that sparked something inside you?

WW: We were like 11 or 12 when the Trayvon Martin incident happened. I could see the pain in my mom when she told me, “That could have been you,” and when she had to instruct me on what to do if a police officer ever pulled me over. She’s like, go ahead and put your ID, registration, everything, on your dash and don’t even reach for it. Because as soon as you reach hand to pocket the police officers can use that as an excuse to pull their weapon and get found not guilty in court if anything happens, because they could say they thought I was reaching for a gun. I do not want to have to have that conversation with my kids.

DB: We were in seventh grade, and Walt and I were the only black people in our classes, and our English teacher called us the token black children. And at the time, I was like, “Oh, like a nickname. That’s cute.” But I went home and told my mom about it, and she was like, “That’s not OK.” 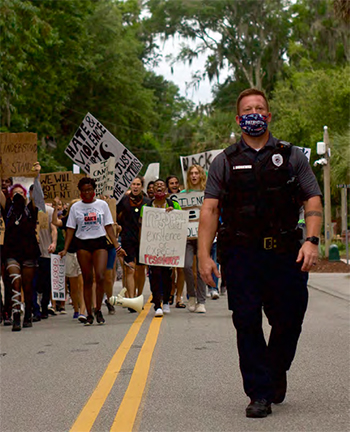 Monthly: The protests and unity are inspiring, but the goal ultimately is action that leads to change. What are you hoping to achieve?

DB: I want to see the next chief of police that comes into Bluffton hold people accountable. I want to get a guarantee from these people that are in these high places. It’s so great to see our leaders like the mayor and the town manager and these Republican leaders, it was great to see them out there. But you know, what are you doing in your office? What are you doing in your 9 to 5? So, if they can come out to these protests and say they stand with us, then when I come to your office during your office hours, you need to tell me that you can actually do something about this. So, I guess that’s the change that I want to see is just, you know, put your money where your mouth is.

Desiree Bailey and Walter Wheeler are interns at the Town of Bluffton this summer. This interview was edited for length and clarity.