“When I first moved here, people thought I was a Jamaican dog walker,” said Amiri Farris.

It’s true that he can often be spotted walking his dogs, Brownie and Bud, around Old Town Bluffton. But he’s also an artist known for his use of a variety of mediums and a professor of foundation studies at the Savannah College of Art and Design.

Born in Pittsburg and raised in West Palm Beach, Farris has lived in the Lowcountry since he received his degree in illustration followed by his master’s degree in painting from SCAD. His work has been exhibited around the world, from the U.S. Capitol in Washington, D.C., to galleries in Paris and St. Petersburg. He has worked in a variety of media, including computer-aided graphics, fine art mediums, collage and a mix of different techniques. His works often use photos combined with original imagery to create art that celebrates life and his contemporary experiences.

“Bluffton definitely has a small town, storybook feel, which I love,” he said. “I know who all my neighbors are, which is really nice.” 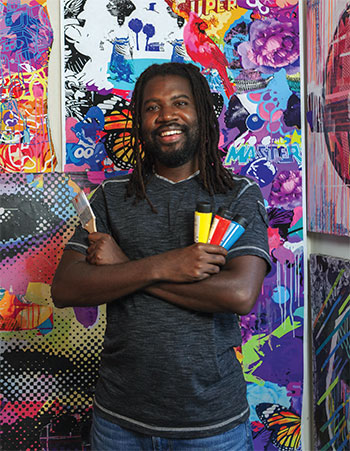 That small-town atmosphere often inspires Farris, who also is known for his large-scale pieces focusing on Gullah/Geechee culture.

“The Lowcountry is a really great place if you’re an artist, you’re always inspired by things outside: animals, birds, insects and, of course, the Lowcountry scenery,” he said. “The pace is kind of slow here, so it helps you to be inspired — it’s not just go, go, go.”

Farris has helped create murals for the Port Royal Sound Foundation Maritime Center and the Savannah Children’s Museum, and he offers art classes and exhibits at the Morris Center for Lowcountry Heritage, the Coastal Discovery Museum, and the Art League of Hilton Head Island. Other projects include works for the new Mercedes-Benz Stadium in Atlanta, a portrait of President Gerald Ford that will hang at Gerald R. Ford International Airport in Michigan as part of the prestigious ArtPrize competition, and, inspired by his affection for his dogs, a new series of 12 paintings illustrates each month of 2018’s “Year of the Dog.”

He also recently created a portrait of the restored Garvin-Garvey house, a local landmark.

“When I moved to Bluffton across from the Garvin House, it was dilapidated and falling apart,” he said. People would come and ask, ‘What’s that old building there?’ Now that it’s finished, people can understand the history and culture behind it. I’ve painted the Garvin pleine aire a couple of times. It makes it easier to paint when you walk by it every day.”

Understanding and paying tribute to the area’s rich history is one of Farris’ specialties — and what makes his paintings of Gullah scenes so moving.

“A lot of artists portray the Gullah/Geechee people as slaves, but they owned their own land and they were a very proud people,” he said. “So my pieces celebrate the people’s history.”

Farris attributes his success to his willingness to share his talent with others.

“A lot of people tell me they want to be an artist, but then they don’t put in the work,” he said. “You can’t be afraid to show your artwork — you can’t create something and keep it in your closet. If you want to be successful, you’ve got to get your work out there. … A lot of times, I create artwork for myself, but then I also think of others and what speaks to them.”

ABOUT THE COVERS: BY AMIRI FARRIS 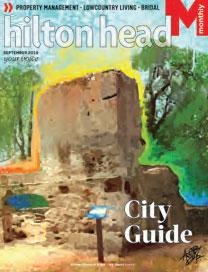 The Stoney-Baynard Ruins are in Sea Pines. The tabby ruins are part of the former Braddock’s Point Plantation. Owner Capt. James Stoney finished his house in 1820, and it was bought in 1845 by William Eddings Baynard. The site was added to the National Register of Historic Places in 1994. 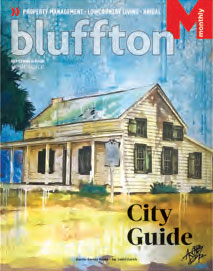 Cyrus Garvin, who experts believe was a slave on Baynard Plantation before the Civil War, built the Garvin-Garvey House in 1870. His family lived there until the 1950s; the house was acquired by Beaufort County Land Open Trust in 2001 and restored. The Bluffton Historical Preservation Society runs guided tours for the public.