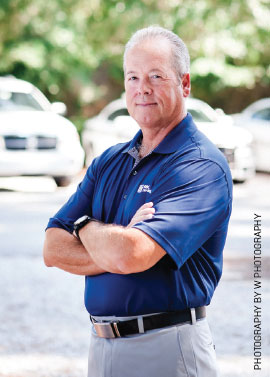 Joey “Jo Jo” Woodward might have surprised some residents when he announced he was challenging long-serving Beaufort County Sheriff P.J. Tanner in the upcoming local election. But Woodward’s reason for running is fairly straightforward: “It is that time in my career,” he said.

In his 20 years as sheriff, Tanner has faced competition just once in the Republican primary, and that was when he first ran for re-election in 2002.  He will square off against Woodward on June 18.

It is time for a new outlook and fresh ideas, Woodward said. But he was hard-pressed to criticize Tanner. In fact, he offered praise.

“Sheriff Tanner has been a good sheriff,” Woodward said. “I’m not saying anything bad about him. He has been a good mentor and I appreciate the opportunities that he has given me.”

Woodward stepped away from his 32-year law enforcement career when he retired as a captain from the Beaufort County Sheriff’s Office earlier this year. The office, he said, is his extended family.

Instead, he said, his decision to run for the position of sheriff is about opportunity and personal goals — it’s the natural next step in his career.

“I was already up to captain,” he said. “It is going to take more than being a captain to get (out) the new ideas.” 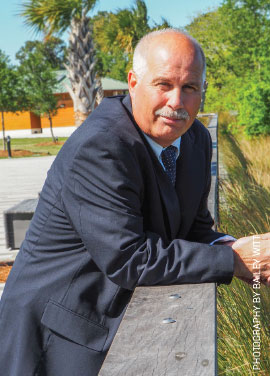 If elected, Woodward said he would focus on community policing, drug enforcement, violent crimes and traffic enforcement. Communication among local law enforcement agencies could also be improved, he said.

“Criminal don’t have boundaries,” he said. “It is important that we have mutual cooperation to combat those issues. We can do so by combining our efforts with  other state and local agencies. We need to go back and become a group of officers who are sharing information on a daily basis.”

Woodward said he also wants to focus on recruiting and retention, in particular better benefits and opportunities. “This is a career. It shouldn’t just be a job.”

Woodward was born in Charleston and grew up in Beaufort and Jasper counties. After a brief stint in fire-fighting, he became a deputy sheriff in 1986, graduating from the South Carolina Criminal Justice Academy a year later. He worked for a short time at the Hardeeville Police Department as a patrol/drug interdiction officer, returning to the Beaufort County Sheriff's Office in 1992. Woodward continued to work in drug enforcement and had a temporary assignment with the DEA Beaufort office. He was promoted to captain in 2013.

Woodward, 55, and his wife, Tracey, have been married 33 years. They have four children and eight grandchildren.

Tanner is a lifelong resident of Beaufort County, living in Bluffton with his wife, Angela McCall. He graduated from the South Carolina Criminal Justice Academy in 1981, joining the Beaufort County Sheriff’s Office’s uniform patrol division three days after his 21st birthday. During his career, he has also been a court liaison officer, criminal investigator, internal affairs officer, SWT team leader and Drug Task Force commander.

When he learned about Woodward’s plan to run for the sheriff job, Tanner expressed surprise — Woodward, he said, had had the chance to address any issues in the Sheriff’s Office while he was still with the department. As captain, Tanner said, Woodward was responsible for internal and external communication, noting what Tanner called a high rate of turnover in Woodward’s district.

“What were you doing in your day-to-day job to make things better?” said Tanner, who plans to run on what he called a proven track record.

“What 20 years gives you is a seasoned, veteran sheriff,” he said.

Salaries for deputy sheriffs start at $40,000 annually, which Tanner said is competitive. Efforts are underway to increase deputy pay, he said.  The department has 250 deputies out of a total of 341 full-time positions. There are no more than three open deputy positions, Tanner said. Growth in local cities and communities further complicates retention, he said. Younger officers may see opportunities for faster growing pay and career paths in the expanding communities.