Thanks to a generous donation, Lowcountry Legal Volunteers is extending its reach in a region where wealth and poverty discreetly co-exist.

The money, with a match from the Community Foundation of the Lowcountry, allowed the Bluffton-based group to add a new attorney — a move that doubles the number of practicing lawyers on the nonprofit organization’s staff.

Lowcountry Legal Volunteers provides free legal aid to low-income residents in Beaufort, Jasper and Hampton counties. Clients must earn less than 125 percent of the federal poverty level based on household size, and cannot hold liquid assets of more than $5,000.

The organization closes or settles around 100 cases each year, according to executive director Shannon McClure.  By adding Matthew Lindauer — who has been a volunteer at the clinic since 2016 — as an associate attorney, the firm should be able to add an additional 50 cases the first year and eventually double the caseload, she said. 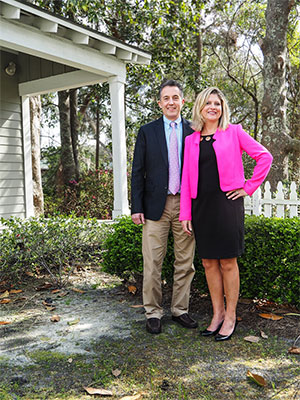 Lowcountry Legal Volunteers opened its doors in 2000 with a grant from the Hilton Head Island Foundation — the forerunner to the Community Foundation of the Lowcountry. Community awareness the legal needs facing low-income residents has increased, including among Hispanics, McClure said. The firm has a bilingual paralegal on staff, which has help build trust among Spanish-speaking clients. As part of its growth, the firm also is considering a move to a more central location, like Okatie, to be closer to its clientele.

“We are graceful to the community foundation for starting us out,” McClure said, “and to come full circle to helping us with our growth.”

Lindauer joins executive attorney Anne Caywood on the organization’s staff, which also includes 20 legal volunteers — many of them retired attorneys from other states.

“We can’t thank our volunteers enough because they are they people who help the operation move,” Lindauer said. “Without them, it would just be chaos and backlog.”

WE CAN’T THANK OUR VOLUNTEERS ENOUGH. WITHOUT THEM IT WOULD JUST BE CHAOS AND BACKLOG.

Many of the volunteers previously were in private practice, McClure said, but not necessarily working in family law.

“So, they are having to relearn, but the legal mindset is there, such as in the preparing of the documents,” she said.

As a volunteer, Lindauer did plenty of document prep work — mainly spending his time drafting claims. The transition to a full-time position has given him a deeper appreciation of the organization’s impact, he said.

“Now, you associate the face with the pleading, and when you start to get into the story, and hearing how badly they have been exploited, it has an affect on you that you just are not prepared for,” he said.  “You’re not prepared for the emotions you feel.”

Lowcountry Legal Volunteers’ focus is family law: child custody, child support and divorce. The group also does simple probate such as wills, health care, power of attorney, name changes and birth certificates. Many cases are more than routine, though. Indeed, the most challenging are those where stakes are “emotionally high,” said Caywood, who has been with the group since 2015.

“The real heart-breaking ones are where women have been abused,” she said.  “I had one woman come in and I was sitting with her in the initial client intake and I looked at her arms. Her arms were completely scarred. Her husband had thrown hot oil on her. You know, she was a very strong person, so I had to keep it together.”

Caywood said that while working with abused clients is emotionally tough, she gets some satisfaction when a case has been successfully closed.

“What is really is cool is when you are in the final hearing,” she said. “The client is very thankful to be free of whatever circumstances that they have been put in. It is just that gratitude that you see that I had never experienced from other clients in my years of practicing law.”

Lowcountry Legal Volunteers is located at 181 Bluffton Road, Suite A103, in Bluffton. The group offers free legal assistance to low-income residents who earn less than 125 percent of the federal poverty level based on household size.

For more information, call 843-815-1570 or go to lowcountrylegalvolunteers.com.