Different methods, but the same goal: voicing concerns about school safety and standing with others jolted into action after 17 people were shot and killed by a gunman at a Parkland, Florida, high school. Nationwide, thousands mobilized at 10 a.m. March 14, walking out of their classrooms for 17 minutes to honor the Florida victims and to push for legislation to make their schools safe from gun violence.

Ami’s action was probably the area’s most dramatic. She disagreed with Beaufort County Superintendent Jeff Moss’ statement that said students, for safety reasons, should find alternative ways to express themselves during the national walkout. Bluffton High planned to have students write letters during the walkout’s 17 minutes — but Ami didn’t think that would bring enough attention to the cause. As a young AP student, she felt that without a dramatic move, her profile would be too low to get other students’ attention.

So, she said, she wrote on the walls of Bluffton High’s 12 bathrooms. 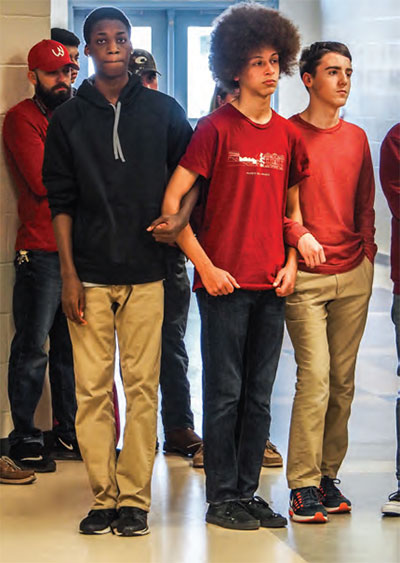 Mia Hughey, Ami’s mother, noted that her daughter was able to write her message unhindered. “Her weapon was a Sharpie, not a gun.”

Ami received a three-day suspension and faced criminal charges for her actions. Her mother signed her out of school for the national walkout.

“(The walkout is) a display of unity among the nation’s youth to show that we will not be quiet until we are safe in our schools,” Ami said of the event.

Each student who left school on March 14 without being signed out by a parent served one day of in-school suspension in the following week.

Valentina echoed similar concerns as she helped plan for a school “walk-in” designed to honor the Parkland victims.

“We just want a safe environment to study and learn,” said the 16-year-old honors student. “A lot of people, and even some middle schoolers, are afraid of going to school because of all that has been going on.” 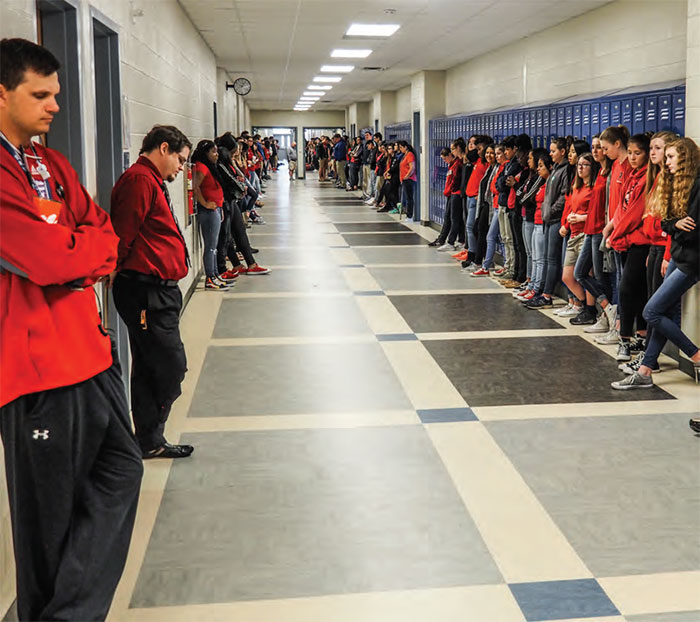 Galindo and fellow honors student Emma Mayers, 16, spearheaded the plans for Hilton Head High students to participate in the March 14 observance without the fear of disciplinary action. Instead of leaving the school building during the protest, Hilton Head students left their classrooms and filled the school hallways.

“We wanted to create a way to safely have our voices heard, but not have it be so that we’d get in trouble,” Emma said.

The principals at Hilton Head High and May River High School did not support the idea of students leaving school, instead urging them to find other forms of expression. At both schools, student leaders decided on “walk-ins” where students could leave classes and go into the hallways during the observance. Students who left school without being signed out by a parent faced discipline under the district’s code of conduct.

Ultimately, 76 Bluffton High students left school during the observance. They rallied across the street from the school with parents and members of the community, including Bluffton Mayor Lisa Sulka.

A LOT OF PEOPLE, EVEN SOME MIDDLE SCHOOLERS, ARE AFRAID OF GOING TO SCHOOL BECAUSE OF ALL THAT HAS BEEN GOING ON.

At Hilton Head High, students sat in silence in the halls as the names of the 17 Parkland victims were read aloud and later wrote letters to legislators urging action. No students left school during the observance, said principal Amanda O’Nan.

May River students developed a week of activities to mark the event — including a “walk-in” — all centered about school safety and gun violence.  One student left the building during the national walkout, said principal Todd Borscheuer.

In total, 84 students in the district left school during the walkout, said Jim Foster, the director of communications for the county school system.

In the wake of the Parkland shooting, county officials are discussing enhancing and improving existing security measures — including full-time resource officers in all middle and high schools, redoing radio signals and insisting on consistency in how visitors access schools.

Political response across the nation to the Parkland shootings has been mixed. Florida passed a measure that, among other things, allows for armed teachers and raises the legal age to purchase all guns to 21. South Carolina is weighing adding money for more school resource officers and providing training to help teachers better identify youngsters who may pose a danger; there also have been calls to arm the state’s teachers. Washington is also looking at legislation to strengthen school security, but not gun reform.

Young people want those in power to know that they just want safe schools.

“It is not okay, and it will never be okay, for children to fear coming to school every day because they are afraid that the school will get shot up,” Emma said.