For longtime islanders, it can be hard to believe that it’s been 35 years since Tom Reilley took a walk up William Hilton Parkway with a handful of friends, forming a parade that would ultimately be halted at the Sea Pines Circle for its lack of a permit.

For those new to the area, jostling for space along the parade route among 30,000 other spectators, it can be hard to believe that such a massive parade had such humble origins. The journey from there to here will reach the 35-year mark when the 2018 parade steps off at 3 p.m. March 11, rain or shine.

It’s an auspicious year for a St. Patrick’s Day Parade, seeing as green is the color of the day and the 35th is traditionally considered the jade anniversary.

“We’re very excited about this 35th anniversary, and we have lined up some great entertainment for the parade,” said committee member Lynne Hummel. “I think we have more pipe and drum bands than ever before.”

THIS IS A GREAT HONOR — ONE OF THE GREATEST HONORS OF MY LIFE. I’M LOOKING FORWARD TO BEING IRISH FOR A DAY 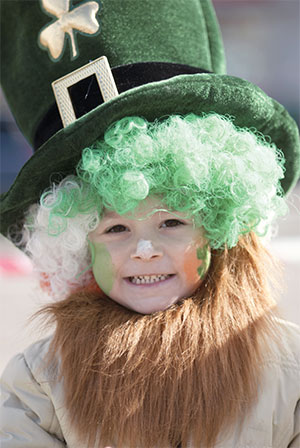 They’ll be joined by a smorgasbord of area marching bands, floats from local businesses and a full menu of food-themed floats. In addition to the Oscar Mayer Wienermobile, fans at this year’s parade will marvel at the oven used to cook the Guinness World Record “World’s Largest Meatball” at Hilton Head Island’s Italian Heritage Festival last fall, as well as the world-famous Big Idaho Potato. This 6-ton tuber will roll through this year’s parade on the bed of a 72-foot truck.

That’s a three-course meal of some seriously big food.

Leading the charge this year will be grand marshal Dr. Emory Shaw Campbell, a native island leader famed for his leadership and tireless efforts to preserve Gullah culture.

“Our grand marshal has been described as a peace maker and a bridge builder,” said Alan Perry, the chairman of the parade. “These are attributes that exemplify and emphasize the ‘unity’ in ‘community’ and this is what we look for when selecting a grand marshal.”

The selection of Campbell, he said, is a true testament to the island’s heritage.

“It isn’t very often we meet someone over the age of 43 who was born on the island. While almost everyone here is a ‘cumyah,’ this person is a ‘binyah.’”

Accepting his sash, Campbell told the gathered crowd at Reilley’s, “This is a great honor — one of the greatest honors of my life. I’m looking forward to being Irish for a day.”

As are we all.