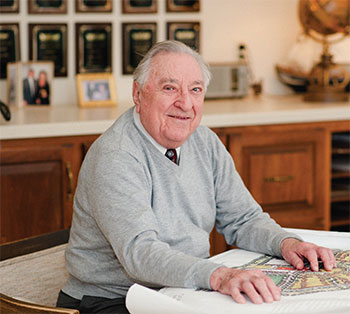 WALTER GRAVER LEFT A LEGACY OF SUPPORT FOR THE ARTS

For more than three decades, Walter Graver put everything he had into making Hilton Head Island a better place for residents and visitors alike.

“I’ve sat in the shadow of the trees that other people have planted here on Hilton Head,” Graver told Hilton Head Monthly in 2014, “and I don’t mind if the next generation finds some shade in the trees I’ve helped to plant.”

He left behind a flourishing forest.

Graver died Oct. 23 at age 96 after suffering from pneumonia, but his philanthropy lives on in every corner of the island he called home since 1986. His widow, Lois, said cards offering condolences and kind notes have poured in since his death. She hasn’t counted them, but estimates there must be at least 100. Similar sentiments have peppered the letters to the editor sections in local publications.

“Walt was a wonderful man and did so much for everybody,” Lois said. “What I’m reading is exactly the way he was.”

The list of Lowcountry organizations and programs Graver served is a long one. He was a past president of the Hilton Head Symphony Orchestra, served for many years on the Hilton Head Cultural Council, was a founding member of the South Carolina Youth Leadership Conference, served on the committee that oversaw the opening of the Self Family Arts Center — now the Arts Center of Coastal Carolina — was instrumental in creating the Hilton Head International Piano Competition, and led the Youths Friends Association — an organization that pre-dates his time on the Hilton Head and that focuses its grants on inspiring young people through the arts, including support for the arts programs at Hilton Head Island High School and Hilton Head Christian Academy. Beyond Hilton Head Island, Graver was involved with the Thornwell Home for Children, a foster home in Greenville that is affiliated with the Presbyterian Church. He also contributed behind the scenes to numerous other organizations, and in addition to all those metaphorical trees he liked to mention, he also donated an actual one: the Town of Hilton Head Island’s official Christmas tree.

The common threads that run through most of Graver’s philanthropic efforts were his love for children and his passion for the arts.

Graver’s greatest desire was to bring a multimillion-dollar arts and entertainment center to the island. He was a founding member of the nonprofit group Community Vision of Hilton Head, through which Graver and other members spent more than a decade and upwards of $100,000 of their own money to fund a study that estimated a $500 million economic impact on the region over the first five years after opening such a facility.

“Walt was a man of vision,” said Dan Castro, who worked with Graver on a number of projects over the past decade and was the vice president of Community Vision. “He was an industry titan at one time, and he took that kind of vision and leadership and applied it to everything he did.”

Despite being involved in countless projects, Graver was rarely the front man who reaped the credit, Castro said. But when an organization he was passionate about needed a boost, “he would jump into it with all four feet.” The quality that most defined Graver was his persistence, but beyond that it was his ability to keep pushing without hurting the cause.

“In his persistence, he would never offend people,” Castro said. “He was a professional diplomat. I mean, he could have worked for the State Department. Even when someone disagree with him, he always left them loving him, and that’s why he’s always had such great respect from anyone he came into contact with on the island.”

That persistence is finally paying off in the quest for a new arts and entertainment center. The town recently established a committee to study the feasibility of bringing Graver’s vision to fruition and hired an arts and culture director — two “home runs” for the arts community that Castro attributes in large part to Graver’s hard work.

“Walt set the stage for many things that are yet to come,” Castro said.