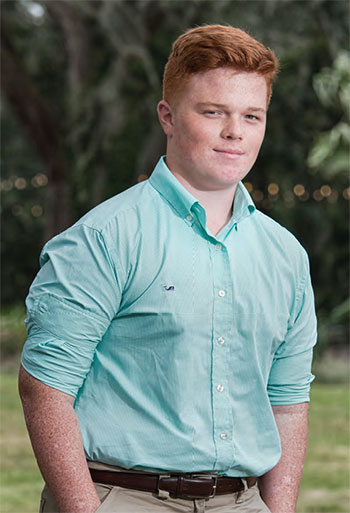 John Acker tried the sports thing, but it didn’t stick. He could never “find that angst.” Instead of watching ESPN, he was drawn to C-SPAN; in lieu of memorizing football stats, he brushed up on voting records.

So it’s no surprise that John is making his name in the political realm, except for one small fact: He’s only 17.

A junior at Bluffton High School, John is working as the campaign manager for Larry Toomer’s Bluffton Town Council re-election bid while running for the position of youth lieutenant governor through the Youth In Government program — two roles he views as stepping stones to a future political career.

“Politics is just some kind of calling for me that I wasn’t able to find in anything else,” he said.

He first heard that calling as a seventh-grader in New Jersey, when he attended a town forum and was inspired by the passion he saw in the residents who spoke.

John won’t be eligible to run for president for another 18 years — he’s not even halfway to 35, the age required by the Constitution — but he is laying the foundation. As a sophomore at Bluffton High, he joined the S.C. Youth in Government delegation, a program operated by the YMCA of Greenville that takes over the state Capitol in Columbia each November for its Model Legislature and Court Conference.

During this year’s meeting, John will be running for youth lieutenant governor. If he wins, he’ll preside over the model Senate for the remainder of the conference, during which the Palmetto State’s future politicians and leaders will pass their agenda. None of the bills are legally binding, but they often spark debate in the actual South Carolina legislature.

It was Bluffton High social studies teacher Erin Reichert who recruited John for the Youth In Government program, and it was Reichert who set up a meeting with Toomer, who was planning his campaign for another term on the Bluffton Town Council.

John went into that meeting at Bluffton Oyster Factory expecting to be offered a position overseeing youth outreach — as he did for Rep. Bill Herbkersman’s campaign last year — or perhaps helping with social media.

“He said they would like to offer me the position of campaign manager,” John said. “I was like, ‘I’m barely 17. I just started driving.’ I looked at him and I said, ‘Are you sure, man? I’m still in high school.’ ”

The first thing John did was reach out to Caleb Weiss and Nick Butts, his two best friends and business partners in a small consulting group the trio created. He then added two more staff members — all high school students — to help run Toomer’s campaign.

“It’s been stressful, I won’t lie,” John said. “I’m balancing a chemistry test and a public forum at the same time, but I think I have this unique ability that not a lot of high schoolers have. I might be stressed out and have all this stuff due, but I can prioritize. I want to do it. I want to work for Larry and go to school and do ROTC and do everything else I do at the same time. Sometimes it’s not always great, but I usually can pull something great out of it.”

In many ways, John represents a fresh new way of thinking about politics. He has long considered himself a Republican, but has begun to feel uncomfortable with that label. He’s a fiscal conservative but socially liberal and tremendously concerned with conservation, which was a big draw in working for Toomer, whose family has made its living off the local seafood trade for decades.

John said he has gained much of his understanding of politics through unconventional means — binging shows like “Parks & Recreation” and “The West Wing” on Netflix — but feels that knowledge has served him well and will help him serve others.

“The truth is I want to help people. That’s what I love to do,” he said. “Right now I’m helping Larry, and through that I’m indirectly helping people in Bluffton because I think Larry is a candidate who cares about Bluffton and the future of Bluffton.”

John still envisions himself being president one day, but his vision for the path he’ll take to get there has changed over the years.

When he moved to Bluffton in the ninth grade, he started the Junior ROTC program, which has led to a desire to serve in the military. He hopes to attend the University of South Carolina on an ROTC scholarship and attend Officer Candidate School.

“When I come out, I’ll step right into South Carolina politics here in the Lowcountry,” John said. “Obviously, that will be easier said than done, but if I can do it at 16, I can do it at 25.”