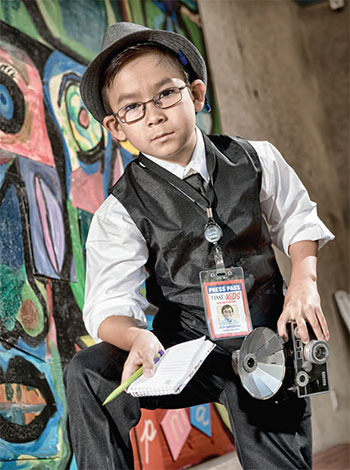 The Hilton Head Island boy found out in August that he was one of 12 students from across the U.S. to be chosen as a Time for Kids reporter. More than 300 students applied for the opportunity to write for the magazine, which brings journalism to classrooms around the country thanks to its educational Time for Kids program.

Christopher received his media badge and Time for Kids shirt at the end of September, followed by his first writing assignment — and deadline: He was given a week to write a book review of “Saving Marty” by Paul Griffin.

As a Time for Kids reporter, the Sea Pines Montessori Academy fifth-grader is expected to write one assignment each month over the next year. His articles will be published in the digital and print versions of the magazine.

“I was very excited to get a chance to be one of the reporters,” Christopher said.

The first step in the application process was to write a news article. Christopher decided to interview Hilton Head Island town manager Steve Riley about his experience dealing with Hurricane Matthew.

Christopher’s article apparently impressed the judges at Time for Kids, and he was one of 30 students to make the first round of cuts.

Next Christopher had to write a story about a “hometown hero” and submit a 2- to 3-minute video demonstrating the top five amazing things people should know about him.

Christopher chose to interview Trip Sloan, a family friend and member of the Marine Rescue Squadron. Sloan rescued a North Carolina family’s dog, which ran off after Fourth of July fireworks and survived two days in the water near Bluffton. That made Sloan a hero in Christopher’s eyes.

For the video portion of the competition, Christopher shared that he plays the piano and violin, is a professional voiceover actor, and that he loves science and fishing. He also spoke about how his mother’s family had escaped communism in Vietnam before moving to the U.S.

This isn’t Christopher first stint as a reporter. He also covers news and weather for his school’s TV station. And he has lofty goals for his journalism career.

“If I could interview anyone in the world, I would choose either an astronaut, a government official or maybe Robert Downey Jr.,” Christopher said.

Despite his achievements, this talented young man is a regular kid. He and his mom fish in their backyard. He loves Disney World, and his favorite ride is Expedition Everest in Animal Kingdom.

Christopher will also be playing the role of Les in the Arts Center of Coastal Carolina’s performance of “Newsies” on stage throughout the month of December. Who knows? Maybe one day he’ll be writing a review of the latest Broadway smash hit — or possibly starring in it.