HIGH COST OF TUITION AND FEES WORRIES MANY S.C. STUDENTS AND THEIR FAMILIES

These days, the price of sending a child to college is enough to make a parent weep. But colleges and universities aren’t totally responsible for the sticker shock. Many factors play into the high cost of tuition and fees.

Nationally, the average annual cost for undergraduate tuition, fees, and room and board for the 2014-15 school year was $16,188 at four-year public institutions, $41,970 at private nonprofit colleges and $23,372 at private for-profit institutions, according to the most recent data available from the National Center for Education Statistics.

To live on campus for in-state students at public universities in the Palmetto State, the cost has risen nearly 12 percent over the past five years. But this increase is well below the national average, according to College Tuition Compare.

Families are paying more in part because contributions by the state and endowments have fallen.

In South Carolina, state lawmakers set aside $491 million for public colleges in 2015-16, roughly 7 percent of the total budget. Compare that to the $758 million the state distributed to public universities in the 2007-08 academic year —11.3 percent of the budget and the highest level of state-supported funding in the past decade.

All the bells and whistles

Competing to atract students, schools are adding high-end amenities from contemporary hi-tech dorm rooms to restaurant-quality dining halls that resemble trendy cafes. These world-class amenities come with rising costs that are passed along to students and parents.

Add to this the snowballing cost of college sports, such as improved stadiums and training facilities and generous coaching salaries. And then there are rising costs of benefits for full-time faculty and staff, high salaries for non-teaching positions and more expensive insurance premiums. All this adds up to a recipe for financial hardship for many students.

Where are the students?

The number of students enrolling in high education nationwide has remained relatively flat in recent years. Overall, fall enrollment in degree-granting institutions declined 0.5 percent between 2009 and 2014, according to data from the National Center for Education Statistics.

Demographics are mostly to blame for the lack of increase, but experts say the high cost of attending a four-year institution also plays a role. In an effort to avoid student and parent debt, many families are choosing to send students to less expensive two-year community colleges first.

Others are questioning if a four year degree is worth the price. In recent years, college graduates in some fields have had a hard time finding jobs. Others find professional employment, but their salaries aren’t high enough to both provide a decent quality of life and make student loan payments, which can be hundreds of dollars per month. Even after applying for financial aid including grants, federal loans, work-study and tax benefits, many families of high school students aren’t sure if college is possible.

What can be done?

The state’s colleges and universities must ensure that investing in a college degree pays off for students, both financially and academically, said Tim Hofferth, chairman of the South Carolina Commission on Higher Education.

“With a renewed sense of purpose, we have turned our focus to one job: ensuring that higher education in SC is accessible, that it is affordable, and that it offers academic excellence,” Hofferth said. 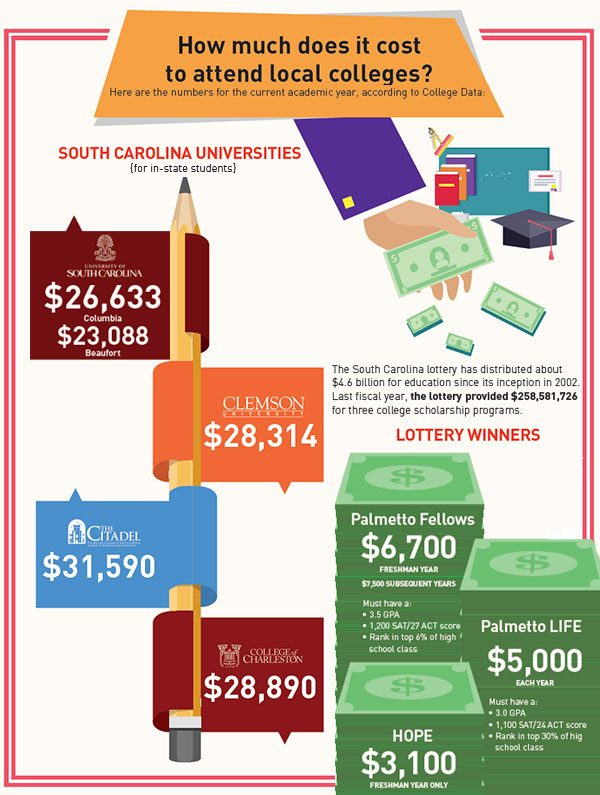