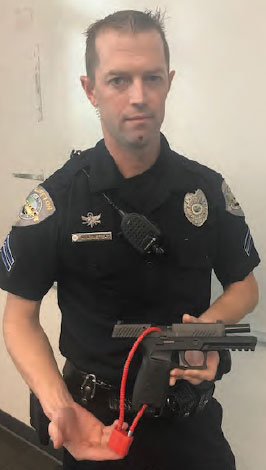 In his 14 years in law enforcement, in Charleston and now as a member of the Bluffton Police Department, officer Doug Armstead has worked his share of gun accidents.

That’s why safety around firearms — no matter if the person is a seasoned gun owner or a novice — is one of his mantras.

In the wake of the mass shooting in Las Vegas, the media has been awash with stories about guns and the U.S. laws that regulate them. But advice for civilians in situations involving guns has been hard to find. From gun safety at home to personal protection and increasing the chance of survival if faced with a deranged shooter, training can help.

Most people who are accidentally shot are injured by family members, Armstead said.

“Most accidents involve kids playing around who find a gun,” he said.

Gun owners should keep their firearms in a locked gun safe, experts say. Owners who don’t have a safe should make sure their weapons are unloaded, and then store the gun and ammunition separately. Even a locked drawer can act as a gun safe, Armstead said — thought it’s obviously not as effective. Adults who fail to secure their weapons properly could be charged with negligence if someone is injured, he said.

When transporting a handgun in a car, state law says it must be kept in a closed container such as the car’s glove box, center console or trunk, or in a gun safe.

Proper storage of guns can save lives in another way: Although homicides and gun accidents get more media attention, suicides involving guns make up the largest number of firearm deaths in the U.S. So far in 2017, about 22,000 people in the U.S. have killed themselves using guns.

“Most suicides are impulsive,” Armstead said. “Anything that makes it more inconvenient is going to prevent some suicide attempts.”

Gun safety education is part of the Bluffton Police Department’s annual Citizen’s Police Academy, a 10-week free class for Lowcountry residents who want to learn how law enforcement works. In the past, the department also has distributed to pistol locks to residents who requested them. A pistol lock prevents the weapon from firing by blocking the gun’s barrel or preventing ammunition from loading.

Although safety education is not required to purchase a gun in South Carolina, “everybody needs to be trained about the weapons they have,” Armstead said, adding that it’s also important to check instructors’ certifications.

And it’s not just gun owners who need to know about gun safety. Children should be taught that if they find a gun, they should not touch it and should walk away and immediately tell an adult, Armstead said.

Many Lowcountry residents carry concealed weapons, Armstead said, and this is another area in which gun education is needed. Legal consequences exist for carrying a concealed handgun without a permit.

And while state law prohibits concealable weapons in schools and other public buildings, as of 2014 permit holders can carry their concealed guns into bars and restaurants, as long as they don’t drink while inside. Of the 40 states with right-to-carry laws, 20, include South Carolina, allow guns in churches.

After the shooting at Emanuel African Methodist Episcopal Church in Charleston, some Bluffton churches have hired security firms or off-duty police officers to provide security, Armstead said. Others now encourage worshippers to come armed to services, he said.

But churches, businesses and private establishments can enact their own weapons bans by posting a sign that says “No concealable weapons allowed.” The signs must follow regulations about size and color.

What if you have the terrible luck to be somewhere out— whether at church, the movies, a concert, or just running errands, for example — and encounter an active shooter? Bluffton police have prepared a PowerPoint presentation to teach residents how to best respond in such a situation. The best plan for unarmed civilians, Armstead said, is to run. Put distance between yourself and the shooter.

“If you hide, you pretty much put yourself in a corner,” he said.

If you’re close to a violent person with a gun, Armstead said, try to pick up something and throw it at the aggressor, temporarily taking away his or her control of the situation. That may give you time to escape.

Of course, your response will depend on how close you are to the attacker. Although more than 550 people were shot in the Las Vegas attack, the effective range of all types of weapons diminishes greatly as the distance of a moving target increases.

If you have a weapon, assess the situation well before you decide to use it. Armed civilians who decide to confront an attacker can be dangerous too, due risk of accidentally shooting a bystander or other victims who are trying to escape in the confusion. Never fire in a direction in which there are people or any other potential for mishap.

If you draw a weapon on an attacker, have some someone else immediately call 911 and provide detailed descriptions of “the good guy and the bad guy,” Armstead said. When law enforcement arrives on the scene, it’s important that anyone who is armed follow officers’ instructions.

“When I arrive, I don’t know exactly what is going on,” Armstead said. “If I see you holding someone at gunpoint, you are now the threat.”

Organizations who would like to receive the Bluffton Police Department’s PowerPoint presentation about what to do in an active shooter situation should contact Joy Nelson at jnelson@townofbluffton.com