LOWCOUNTRY GROUPS RESPOND TO CRISIS IN PUERTO RICO AND THE CARIBBEAN

Lowcountry residents Omar Nieves and Andrew Salvat-Vega met because of a hurricane, although the storm took place thousands of miles away.

Both men are Puerto Rican, but they met for the first time in Bluffton at a recent meeting of new nonprofit organization LowCountry Area Hurricane Relief for Puerto Rico and Caribbean. The get-together took place in the community room of May River Village apartments, where people of many races and nationalities gathered to discuss how they could help the devastated region. Like Nieves and Salvat-Vega, who found out about the meeting on Facebook, everybody there wanted to make a difference.

“Our first meeting was both a planning session and a mutual support group,” said Gustavo Gomez, the group’s founder. “There were tears.”

The tears came when Puerto Ricans introduced themselves and told how the Sept. 20 hurricane had affected their family members and friends.

Action followed soon after. Old Town Bluffton Storage, near the apartments, donated a storage unit so the group could store the bottled water, toiletries and other supplies that were collected. Everyone mobilized their connections in the community.

Businesses, churches, schools and individuals have given generously, often in creative ways. St. Francis by the Sea Catholic Chuch and LowCountry Community Church collected canned goods and other food items.  Lowcountry Presbyterian Church and Temple Oseh Shalom collected money as well as supplies. At May River High School, for a donation of $1 students could wear jeans instead of their school uniforms. When the group’s storage space was filled with items, My Sons Moving and Storage in Bluffton donated the use of a warehouse. Hospice Community Thrift opened on a Sunday, when the store is usually closed, for a a half-price sale and donated the proceeds. The group manned booths to collect donations at the Latin Music Festival and the Bluffton Seafood festivals.

“Our kids can relate because they’ve been through Irma and Matthew,” she said. “In school, they are learning that Puerto Rica is an island that is U.S. territory.”

Wibel’s brother-in-law and sister-in-law live in Puerto Rico, and she’s been in touch with them by phone.

“They’re exhausted. It’s the stress, the heat and the struggle to get basic needs met,” she said.

For many, the hurricane has changed everything. Gomez was scheduled to retire from the U.S. Marine Corps on Oct. 6, but opted to delay his retirement ceremony because it’s unclear when his parents and other relatives in Puerto Rico will be able to travel to attend it. In the interim, he’s figuring out how to best get the Lowcountry supplies to Puerto Rico. Executives at Gulf Stream as well as an international nonprofit organization and shipping operations in Miami and New York have expressed interest.

Others in the Lowcountry are supporting the Ricky Martin Foundation. The international nonprofit group, founded by the Puerto Rican singer, has raised $3.8 million for the island since the hurricane hit and has sent planeloads of supplies to help its residents. The organization recently announced plans to partner with Habitat for Humanity once the island’s rebuilding begins. Bluffton Middle School recently held a fundraiser to donate to the group’s efforts.

At press time, almost 60 percent of Puerto Rico was still without power. Of the 3.4 million people in Puerto Rico, about 30 percent were without access to safe drinking water, according to government estimates. But money, batteries, bottled water, food and other supplies from Gomez, Nieves, Salvat-Vega and many others in the Lowcountry and across the United States are on the way. 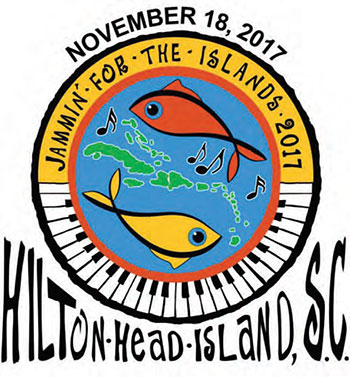 JAMMIN’ FOR THE ISLANDS

Hurricanes Maria and Irma ravaged many other Caribbean Islands in addition to Puerto Rico. A group of local musicians are planning a benefit jam session at 4 p.m. Nov. 18 at the Black Marlin Hurricane Bar on Hilton Head Island. Musicians who want to participate should call 724-359-8384 or email toomie1357@gmail.com.  The concert is free and open to the public; money donated at the event will be sent to the Caribbean Disaster Emergency Management Agency. For more information, contact Lisa Cleaver at 843-338-1015 or LisaACleaver@gmail.com.