One young woman who grew up in a Habitat home is now in medical school. When she was heading off to college, she told Wirth that watching her parents build their own house inspired her to work hard to achieve her own goals. 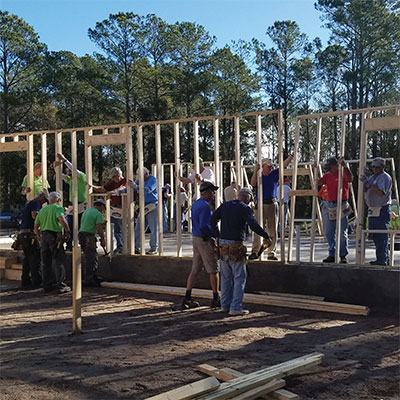 “It’s such a good example for the kids, that the parents have a goal, they follow through on it and they succeed,” Wirth said. “And success breeds success.”

The international Habitat for Humanity gives qualified low-income families the opportunity to own their own homes. According to Wirth, there are now 1,500 Habitat affiliates across the United States, and the charity has housed more than 15 million people in 90 countries since its inception in 1976.

Over the past 27 years, the local Habitat affiliate has either started or completed 105 affordable homes for families in Ridgeland and Bluffton and on Hilton Head, Wirth said.

“It’s enough to make a little bit of a difference,” she said. “There’s still a huge need for affordable housing, but we’re moving along.”

The land for Habitat homes has all either been purchased by Habitat or donated, Wirth said. Landowners, developers and organizations like the Town of Hilton Head Island have all donated property to the organization.

One of Habitat’s most recent communities in the Lowcountry is located on Alex Patterson Road, off Marshland Road on Hilton Head. The Glen was named in honor of Goldie and Helen Glenn, whose generous donation covered the cost of water, sewer and road paving in the community, Wirth said.

The 14 acres of land The Glen sits on were donated by the Town of Hilton Head about five years ago. The first house in the neighborhood was started almost three years ago.

Wirth said when phase one of the Glen is complete, the community will have 16 houses. Thirteen of those homes have been started, and some are already occupied. Phase two is still pending approval with the town, and Wirth said she believes there 17 more houses will be added.

Habitat’s efforts would not be possible without the help of the people who donate their time and money to the cause. Various groups, including local churches, Women in Philanthropy, the Publix Foundation, the Community Foundation of the Lowcountry, Habitat Friends of Colleton River and the Hilton Head Area Association of Realtors, have all sponsored homes.

Habitat is a Christian-based organization but welcomes the involvement of people of all faiths or no faith, Wirth said.

“We know how important diversity is and cooperation between different groups of people,” Wirth said. “It just works wonderfully for us.”

To qualify for a Habitat house, families must earn between 20 and 60 percent of the area’s median income and have a documented need for simple, decent, affordable housing, Wirth said. They must also be employed and pass a criminal background check

When a house is complete, Habitat gives the family a mortgage — $67,000 for a three-bedroom home — with a 0 percent interest rate for 30 years, Wirth said. Homeowners will be required to pay $450 a month to pay down the principal mortgage and cover taxes, insurance and pest control.

Wirth said Habitat will most likely host an application workshop in early November. She said 375 people showed up for the last workshop and 175 applications were handed out — though the group only had 10 houses available at the time.

The local Habitat homes are between 1,100 and 1,200 square feet, and have either three or four bedrooms and one-and-a-half bathrooms, Wirth said. However, if a larger family qualified for the program, the group would build a house appropriate for them.

Wirth is thankful to all who have helped the organization in its efforts to provide affordable homes to families in the area.

“If you donated $1, pounded a nail or said a prayer, it’s all important,” she said. “And we’re very grateful for everybody who does it.”

PHOTOS COURTESY OF HABITAT FOR HUMANITY