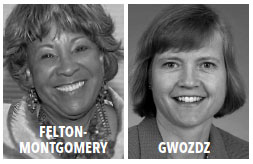 Two new representatives were voted onto the Beaufort County School Board following the Nov. 8 election. In Okatie’s District 6, Patricia Felton-Montgomery collected 4,103 votes to defeat incumbent Paul Roth, who had 1,349 votes. Felton-Montgomery, 70, is a retired educator, serving 40 years as a teacher and district administrator in schools in Washington, D.C., New Jersey and New York.

She has lived in Beaufort County for three years and has two sons. In Bluffton’s District 9, Christina Gwozdz collected 1,998 votes to defeat Bridgette Frazier, with 1,159 votes, Bill Fletcher, with 716 votes, and Christopher Epps, who earned 708 votes. Gwozdz, 58, has lived in Beaufort County for 27 years. She and her husband have three sons. She is a founding owner of the Outpatient Surgery Center of Hilton Head, president of the S.C. Society of Otolaryngology Head and Neck Surgery, and a representative of the S.C. Medical Association’s House of Delegates.