It’s a little-known fact that Hilton Head Island is home to two of the three locked harbors on the East Coast of the United States.

Most visitors to the island have heard of a lock or canal system, like the Panama Canal, but aren’t sure how the systems work or what they are.

A lock system is a combination of gates and a chamber that allows a vessel to go from one water system at one level to another system a different level.

The first documented lock system was developed by the Chinese and was called a flash lock. This system was dangerous and simply gets the boat near the gate. When the gate opens, the boat is able to surf down the river.Hilton Head’s two lock systems, located in the private communities of Wexford Plantation (pictured) and Windmill Harbour, have been around since the early 1980s and are identical. The only other locked harbor on the Atlantic coast is in Jacksonville, Florida 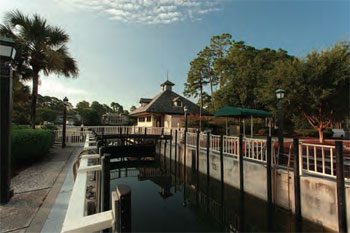 A little later in history, in Europe, they used a lock system to move goods uphill.

Leonardo da Vinci even came up with the “miter gate” system, which is still the most common design used for lock gates today. Most lock systems in Europe were turned over for non-commercial use once trucks become the most efficient to move heavy goods. The locks became an easy way to view the countryside on canal barges.

Hilton Head’s two lock systems, located in the private communities of Wexford Plantation and Windmill Harbour, have been around since the early 1980s and are identical. The only other locked harbor on the Atlantic coast is in Jacksonville, Florida.

Wexford gets about 20 boats coming in and out each day, according to harbormaster Mark Dryden. Locked harbors provide protection and peace of mind to advanced and novice boaters alike.

“If you are new to boating, it gives you a very stable place to get acquainted with learning to park a boat,” Dryden said. “It allows the luxury of not having to worry about high spots that appear over time; no tide, no movement of the silt.”

In addition to safety and protection, Dryden said the locks can provide a sense of community among boaters.

“A locked harbor offers a greater sense of community and social togetherness,” he said. “Locked harbors are also a safe place for boats to endure a storm because the harbormaster can control the level of water, which allows for storm surge.”

So why are there so few locked harbors out there? There are two reasons. First, they require a very specific environment — a combination of good water access, floodable land or marsh and an expert designer.

“Some areas of water are too exposed to current to have a lock system in place,” McMillan said. “Lock systems are expensive and to build one nowadays, there would be a lot of government red tape to get through.”

The second reason so few exist is the high cost. Although they are expensive to build, Dryden says the lock systems have long-term economic benefits because they are stable and cost effective once established.

“In the summer, we get about 40 boats coming in and out, but in the winter there could only be one. It’s seasonal, like boating in general,” Windmill Harbour harbormaster Jake McMillan said.

Windmill Harbour’s lock is operated by the harbormaster and his staff during normal hours; 24-hour access is available to those with a lock card. Those with a lock keycard are trained to operate the fail-safe lock system on their own after hours. Similarly, Wexford’s lock is open 24 hours a day, seven days a week, with a full-time harbormaster and support staff to help the boating community navigate the lock.

These lock systems not only give boaters a great sense of security and reassurance, they also make Hilton Head Island one of the most unique places on the East Coast.