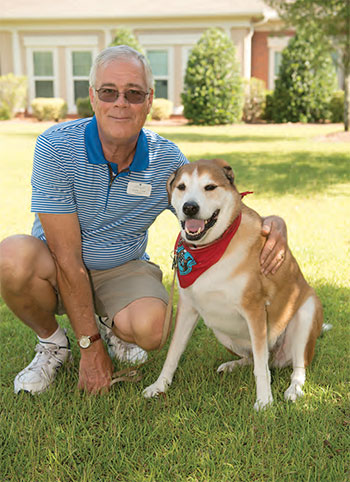 ABOUT EIGHT YEARS AGO, RICHARD CZARK OF BLUFFTON ARRIVED AT A MOBILE HOME FIRE AS A RED CROSS VOLUNTEER TO HELP THE FAMILY, WHO HAD LOST THEIR HOME.

Smokey has been an exceptional dog from the very beginning.

As the flames died down, a soaking wet puppy emerged from under the home. Then another puppy crawled out.

Czark asked the family if the dogs were theirs. They weren’t; the dogs were strays that had taken up residence under the house. The family hadn’t once fed them or set out water. The 4-month-old puppies weighed only 4 pounds.

A firefighter called out, “I’m not leaving until someone takes those pups.”

Czark took one and a firefighter took the other. They named them on the spot: Smokey and Phoenix, respectively.

Czark’s wife wasn’t thrilled to see the dog. “It’s only for a while,” Czark told her. They headed to the pet store for supplies. Czark picked up a small bag of puppy food, but his wife pointed to a large bag. “It’s cheaper,” she said. Czark took that as a sign that Smokey might be staying longer than a few days. 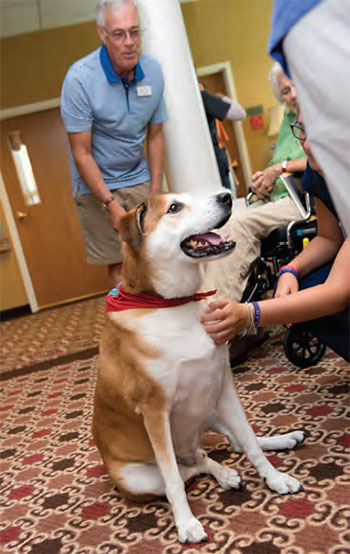 They took Smokey to Abby Bird of Alphadog Training Academy for obedience training.

“Abby said, ‘This is a remarkable dog, you should think of being a therapy dog,’” Czark said. “He’s just such a happy dog.”

Czark knew Smokey had a gift for helping during a home visit with a man with ALS, or Lou Gehrig’s disease. The man was in a wheelchair and couldn’t move his arms or legs to touch Smokey to show he appreciated him being there. So Smokey laid his head on man’s foot for 20 minutes.

“He just knew to do that,” Czark said. “Smokey adjusts to whatever people need from him. Maybe this dog had a purpose and maybe that’s why he survived four months in the wild as a puppy.”

In the eight years he crawled out from under that burned home, Smokey has visited 5,530 centers and schools. As Czark describes him, “he’s a husky mix, heavy on the mix.”

“When I first took him to a center, he had such a good time,” he said. “When it was time to leave, Smokey looked at me like ‘What, we’re leaving already?’”

One visit turned into several per day, several days a week.

While Smokey gets credit as the most active therapy dog in the region, Bird knows Smokey didn’t do it alone. As she points out, “therapy dogs don’t drive. They had to get to those places somehow. It’s the owner, too.” 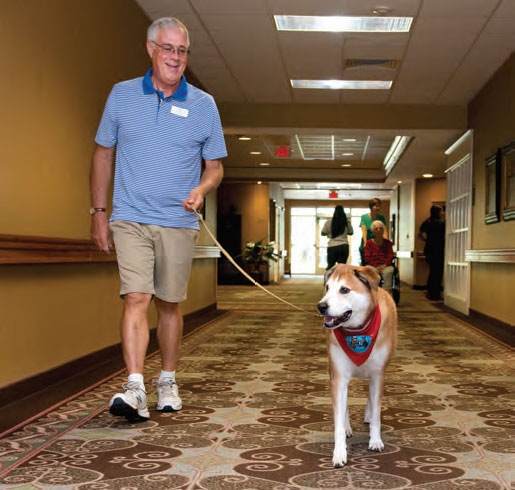 Driving Smokey around is just one way Czark volunteers. He has helped at 80 fires and helped build 85 homes through Habitat for Humanity.

Smokey and Czark have a circuit of 16 senior living centers from Hilton Head Island to Beaufort, including Hilton Head Hospital and area rehab centers.

And Smokey enjoys it all — as do the people he visits.

“I’ve never known him not to have a happy day,” Czark said. “I love to see someone smiling as soon as we walk in. We’ve had a great time.”