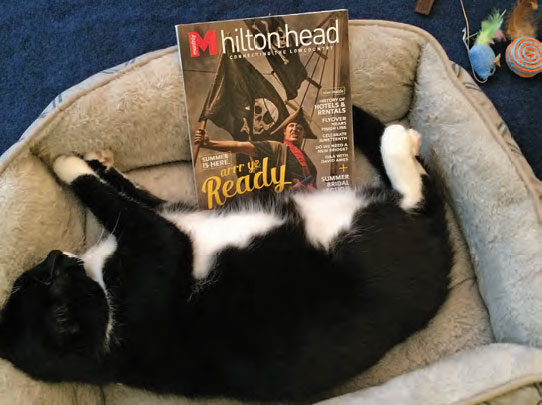 When the employees at Tara's of Hilton Head began feeding a stray cat a couple of years ago, they couldn't have known that he'd become a fixture at Fountain Center, or that they'd play a role in sending the beloved feline on the adventure of a lifetime. Maybe they should have suspected, considering that the stray seemed to have no trouble charming his way into the hearts of the humans around him.

“We were feeding him; Hilton Head Ice Cream was feeding him,” said Denise Weitz, an employee at Tara's. “He became our little salon kitty. All the clients would walk in and expect to see him laying in his little kitty bed. He was such a lovable kitty that no one could believe he was feral.”

As the stray became more comfortable around humans, he roamed Fountain Center freely. Soon he was napping under cars, and darting out into the parking lot and street, which worried Weitz and other employees at Fountain Center who'd grown to love him. They began searching for a home for the kitty, finding one in an unlikely place — all the way across the country in sunny San Diego.

“We were terrified for him,” Weitz said. “We were sure he was going to dart out and get hit by a car. I'd been sending my brother photos all along, because he's such a cat lover. I told him the story and he said, 'I'll take him.' He lives in San Diego.”

“The kitty had his own concierge who put together an itinerary for him to fly out,” she said. “It really did take a village. It was really very bittersweet for us here at Tara's and Hilton Head Ice Cream — we love, love, loved him and just wanted him to be safe.”

The cat, now named Boots Farrel, is enjoying life as an indoor cat at his new home in San Diego. He even has his own Facebook page.