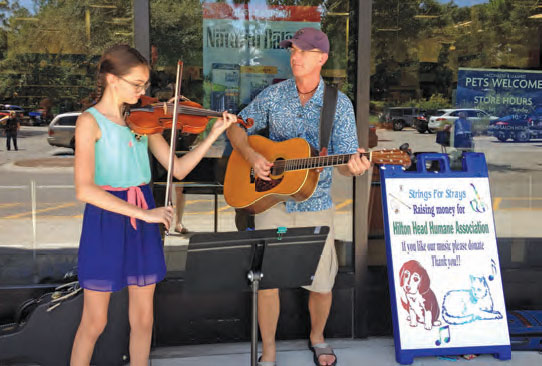 John and Amelie Ratliff — the father-daughter musical duo that comprises Strings for Strays — first got the idea to raise money for shelter animals a year ago, shortly after adopting the family's latest four-pawed member, Cosmo the pug, from Hilton Head Humane Association.

“Our animals have always been shelter rescues,” John Ratliff said. “Our most recent addition, Cosmo, was Amelie’s choice and her very first dog. The adoption process provided Amelie with an introduction to the wonderful people and incredible work done at the shelter. We had already been performing for many years for the residents at assisted living facilities. After Cosmo’s arrival, we just thought it would be a great idea to try sharing our music in public to raise money for the shelter.”

Since then, 12-year-old Amelie, an accomplished Suzuki-trained classical violinist, has held regular performances outside of PetSmart and Caretta Coffee Co. in Coligny Plaza, accompanied by her father on guitar, to raise money for local shelter animals. So far, the pair has raised more than $900 and are on track to meet Amelie's goal of $1,000 in donations by Strings for Strays's first anniversary.

The Ratliffs love having the opportunity to use their music to connect with others, while at the same time raising money for a great cause.

“When the music makes a connection with people you can really see the joy in their eyes,” said John. “It’s a very special feeling to be able to make that happen while raising money for a good cause. It is a privilege for us to be able to make a small contribution in support of such important work.”