In 2006, a small group of Daufuskie Island residents banded together to deal with a growing population of feral cats living in appalling conditions and becoming a nuisance for residents and businesses. The large number of cats lacked the care and attention that we felt they deserved. We decided to take action on this shameful situation. 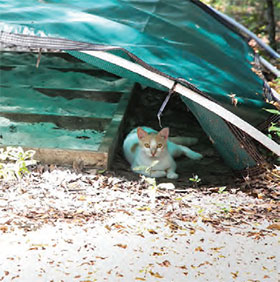 Using the trap, neuter and release method, we transported 181 cats to Hilton Head Island to be treated by the Hilton Head Humane Association and the Lowcountry Spay/Neuter Clinic.  We then managed 11 free-roaming cat colonies using colony management guidelines from Alley Cat Allies and the Beaufort County Ordinance.

Unfortunately, in 2011, a sudden surge of unexplained cat deaths threatened the well-being of our free-roaming feral cats. A grant from the ASPCA in 2012 helped us build the first fully enclosed feral cat sanctuary in the Lowcountry.

The cat sanctuary provides a permanent and safe home for cats that, for whatever reason, are threatened or have been evicted from their outdoor home, and unwanted or abandoned cats that are not suitable for adoption. Residents of the cat sanctuary are provided fresh water and food twice a day, clean shelter, activities to reduce stress, and medical attention such as regular vaccinations and medications. There are 11 regular caretakers and more than 20 volunteers who help with cat sanctuary projects and maintenance issues.

The sanctuary itself is a fully fenced-in area, covering about a half an acre. The sanctuary’s foyer leads to a walking trail. Along the trail are multiple buildings and catwalks, creative play stations, catnip growing in pots and four covered litter boxes bigger than twin-size beds. 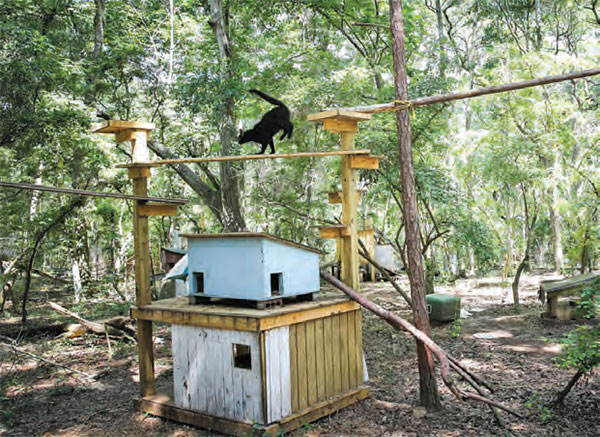 The latest addition is a small kitty pool with floating toys. There are also park benches for people. There are 10 separate food and water stations. Just outside the sanctuary is a squirrel feeder so the cats can watch and salivate as the squirrels come and go.

The Daufuskie Island Cat Sanctuary is organized to serve Daufuskie residents and the Hilton Head Humane Association. We offer spay/neuter services and relocation assistance and help with flea and tick medication for cats owned by island residents. There have been no kittens born to our managed free-roaming cats on Daufuskie since November 2007. Currently, there are only six free-roaming cats, and they are in two managed colonies. Although the free-roaming feral cat population is declining due to attrition, the total population of cats inside the sanctuary fluctuates due to the entry of homeless cats. We work closely with area veterinarians to ensure the health and well-being of our cats.

Thanks to generous financial and in-kind donations from cat lovers, area shelters and veterinarians, along with the countless hours of many great volunteers, the program has been exceptionally successful. The Daufuskie Island Conservancy has recognized the cat sanctuary for its humane approach to protecting island wildlife and has provided a means for charitable donations to the cat sanctuary.