Hilton Head resident Lisa Cleaver spent seven years helping her mother fight cancer, and when she lost that battle, Cleaver was lost as well. Luckily, a Crash saved her.

“I’m a psychotherapist, but I know that grief is a grand leveler. You respond to grief just like everybody else. I knew I needed to have a special soul and spirit to take care of — and that was Crash,” says Cleaver of her 3-year-old Mal-Shi, a Maltese and Shih Tzu mix. “Crash is such an uplifting, loving spirit, I can’t even call him a dog. I call him Crash of God. He really saved me from crashing and burning.” 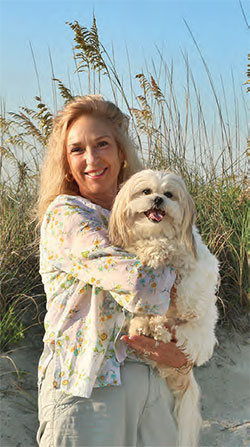 From the moment Crash was born at Teapup, a breeder in Indiana, he was raised to be a therapy dog.

“When the puppies’ eyes open, they start taking them around to nursing homes and special needs classes, so the puppies are indoctrinated to these medical facilities and being held by all sorts of people from the get-go,” says Cleaver. At 11 weeks old, Cleaver became Crash’s caretaker — and his first patient.  She’d never had a pet before, but instantly fell in love.

“He was such a perfect match, for me, and for what I do,” she says.

At the time, she and her husband were living in Pennsylvania, where she had a private practice, and she began introducing Crash to some of her patients. When the couple moved to Hilton Head Island in 2013, Cleaver began working at Marine Corps Air Station Beaufort, where civilians’ dogs aren’t allowed on the base. So she brings Crash with her to various facilities in the Lowcountry on her time off.

So far he’s visited residents in The Cypress of Hilton Head, cheered up patients at Hilton Head Hospital, and has been the “ambassador” for a local, privately run doggie day care and boarding business.

“As the ambassador, Crash would go out on meet-and-greets to help the business owner access compatibility of a potential new ‘client.’ If the potential new ‘client’ passed the ‘Crash Test,’ he or she would be invited for a play date at the business owner’s location,” Cleaver says. “Crash would be present to greet the newbie, and one by one the other (dogs) would be introduced.” 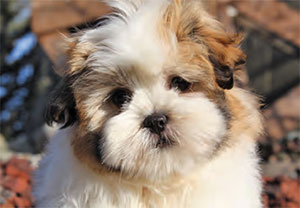 “Crash was the alpha dog — and I think he weighed 10 pounds.”

The adorable lap dog is hypoallergenic, so he doesn’t shed or have dander, which makes him a perfect friend to those with allergy issues. Cleaver says that though he loves people of all ages, he seems to prefer the over-65 crowd.

“He loves being with the elderly,” she says. “And he loves riding on walkers.”

When he isn’t out making others smile, Crash can be found at the beach, digging in the sand and chasing his Frisbee into the surf. No matter where he is, Cleaver says she’s never far.

“Crash is my heart running around outside my body.”