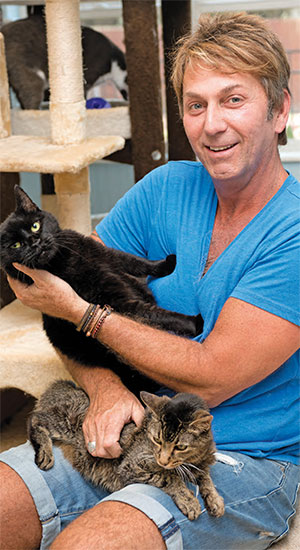 Tony Crosby of Hilton Head Island walks his dogs every morning. A few years ago, he noticed he kept seeing kittens that were obviously feral. So he started feeding them.

“There would be more and more cats and kittens, so I added a second feeding location. Then a third,” said Crosby, a hair stylist and makeup artist at Tara’s salon. “I went to Franny Gerthoffer, executive director of the Hilton Head Humane Association, and said, 'I see all of these events to help dogs. What about the cats? No one thinks about the cats.’ ”

Gerthoffer told him about the feral cat program the shelter has been running for 20 years. The program works to trap feral cats, transport them to a spay and neuter clinic and then release them.

“It costs about $70 per cat to trap them, transport them, treat them and release them," she said.

Cats that are ill or carry contagious diseases are put down, but even then, the program treats them with respect. The Island Funeral Home cremates their remains, Gerthoffer said.

Crosby wanted to help fund the program, so he started brainstorming ideas of how to raise money.

“How about a cut-a-thon where we give haircuts in exchange for a donation?” he suggested.

“Four of us at the salon donate our whole day’s proceeds to the program,” he said. “This year, I also am going to go to every restaurant on the island to ask them to feed the cats and help keep them healthy. The cats are great for rodent patrol. These are working cats. Can you imagine how many rodents we would have on the island without these cats? They do us a favor.”

Groomingdale’s also has been involved from the start. The shop offers pet nail trimming in exchange for a donation, Gerthoffer said. Hilton Head Ice Cream also donates its proceeds from the day.

“We brought in about 10 cats for people to adopt,” Gerthoffer said. “They also added a silent auction and a raffle.”

The success of the fundraising has enabled organizers to extend the feral cat program beyond Beaufort County to Savannah and Jasper County.

Last year, the program rounded up 1,267 feral cats in a three-county area, Gerthoffer said. They notch one ear on each cat so they can keep a tally.

“We’re trying not to have babies born,” Gerthoffer said.

Some people think they’re helping if they bring a feral cat to the humane association or the county shelter, but those cats can’t be adopted out. Feral cats aren’t house pets, she said.

Volunteers try occasionally to introduce a stray into a feral cat community, but that rarely is successful.

“The colonies are already formed, and they don’t like outsiders,” Gerthoffer said. “An introduced cat gets forced out of a colony and then has to fend for themselves. They usually don’t survive. Fortunately, Hilton Head is a pretty loving community. Most people don’t complain about feral cats and we can help them.”

Gerthoffer attributes the program’s fundraising success to the power of Crosby’s personality.

“People like Tara’s and the people there. Tony is sort of a local celebrity. He’s brought a lot to this program. He’s someone who does what he says he will. His passion has made a difference,” she said.

As for feeding the cats? Yeah, Crosby still does that every day.

“If I can’t do it, I get someone else to do it in the same hour that I usually feed them,” he said. “It has to be at the same time because they’re all waiting for me.”