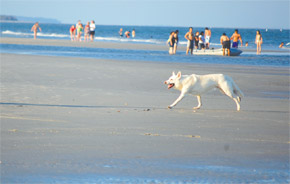 Forming an opinion on the matter is complicated because there is no precedent for it, said Mark Plowden, spokesman for the Attorney General’s Office. Hilton Head officials submitted a detailed request about the issue, he said. Pawley’s Island has already changed its law to ban unleashed dogs from the beach to keep their local ordinances in accordance with state law.

The opinions “take as long as the research does,” he said. “The research is proceeding at a fair pace. … This is all unique territory for this office.”