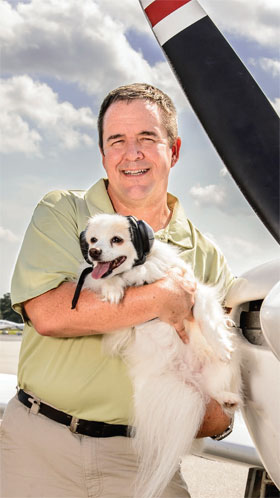 Do you recall the verse, “All things wise and wonderful, all creatures great and small, all things bright and beautiful, the Lord God made them all?”

Perhaps it was this thought back in 2008 that motivated Debi Boies of Landrum, and pilot Jon Wehrenberg to start the non-profit Pilots N Paws organization. Wouldn’t it be wonderful, they thought, if needy animals could be flown to people and destinations where they would be loved and cared for?

Could they mobilize people, pilots, planes to transport “all creatures great and small” to the right places for love and healing?

Today, Pilots N Paws has recruited more than 3,400 pilots, according to executive director Kathleen Quinn. There are nearly 13,000 registered users on their site and more than 60,000 Facebook fans following their activities. Pilots N Paws have volunteers in all 50 states and “creatures great and small,” their rescue animals, number 12,000 in one year.

George L. Cowan is one of those 3,400 pilots rescuing animals for Pilots N Paws. The former Navy pilot and medical doctor, said, “I’ve only just started and I cannot compare with the many other pilots who give time and effort so willingly to help this effort. Flying a dog away from certain euthanasia to his forever home is really a good feeling for me and my wife. Those dogs seem to know you are trying to help. None of them have been any problems at all; in fact they seem to sleep more than anything else once we get airborne and the motion steadies out.”

Cowan became interested in becoming a volunteer pilot for Pilots N Paws when he realized there weren’t many pilots available to fly the eastern coast of South Carolina.

Here in the Lowcountry, the Hilton Head Humane Association’s spokesperson, Nancy Foard said, “We have about 60 dogs and 90 cats at our shelter and they need good homes.”

The Hilton Head Humane Association encourages adoption with their Adopt-a-Pet.com website where you can search for a new pet online. Their shelter is a no-kill one that accepts stray, abandoned or abused animals. They measure their success by the lasting homes and enduring friends they make through their adoption process, so it’s a given that they would reach out to Pilots N Paws for help in finding a good home for one of their animals, though the home might be many miles away.

It took a group of pilots to fly Eski to his new home in Maryland because each pilot flew only one leg of the journey. By the time Eski reached Baltimore, everyone decided his new name would be “Hilton,” to honor his initial rescue home on Hilton Head Island.

Hilton’s story is one of many rescue stories in the annals of Pilots N Paws. Although these rescued animals cannot speak, those kind and concerned people who have moved them to loving homes know by the grateful look in the eyes of these “creatures great and small” that they have performed a worthy service.