Some dogs go above and beyond for their people. Just ask 9-year-old Lea Sheeran. 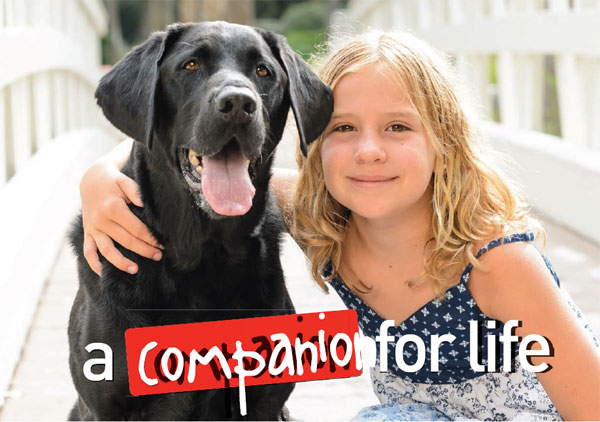 Those of us who are “dog people” know that life is measured in dogs. There was the shaggy protector who sat watch by your childhood bed during thunderstorms. The pooch who would come bounding out the door when you’d visit home from college. The curious puppy who greeted your first born with an apprehensive sniff and a face full of kisses.

Your dogs may vary, but the narrative is the same: You know exactly where you were in life when you recall which dog you had at the time.

But no matter how many dogs come in and out of your life, you never forget your first.

Lea Sheeran certainly won’t, because her black lab, Lucky, is no ordinary dog. By the time you read this, Lucky will have made her home in the Sheeran household ready to serve in the unique capacity of diabetic alert dog.

“What’s cool is that when she’s trained well enough she can come to my school and just lay under the desk,” said Lea, her innocent face spreading into an excited smile.

A diabetic alert dog serves in the same capacity as any service animal, but with a unique skill set that only a dog could provide: Lucky can actually smell changes in Lea’s blood sugar. When her training is complete, Lucky will be able to alert Lea or her parents, Viviana and Doug, to spikes or drops in blood sugar a full half hour before a finger prick.

Training a dog to be a diabetic alert dog is no easy task.

“The training process, from the time we place them in the home, is up to two years,” said Cheryl Trefzger, director of outreach for Service Dogs by Warren Retrievers, the company bringing Lucky to the Sheeran household. “The alerting process takes place once they’re with the family. We need them to sense the child and the parent.”

The story of how Lucky came to the Sheeran household starts when Lea was diagnosed with Type One diabetes while still in preschool. That diagnosis changed everything.

“Having a child with diabetes is a big change for a family,” said Viviana Sheeran. “The day after we came back from the hospital, I got the call saying she couldn’t go back to preschool because they didn’t want to be responsible for a child with diabetes. So it was really overwhelming. You had to learn everything: how to count carbs, keep her blood sugar values in range, prick fingers, calculate the insulin and give the shots. You also have to support your child emotionally; our goal is to make sure that diabetes is not an obstacle for Lea in her life.”

Viviana took family leave to stay at home and care for Lea, constantly monitoring her daughter’s physical state and setting an alarm every night between midnight and 3 a.m. to check Lea’s blood sugar. And while caring for her daughter’s diabetes added to her maternal responsibilities, the real challenge was the change in the young girl’s life that the diabetes presented.

“Any playdate or sleepover had to be in our house,” Viviana said. “That changed her life; she’s never had a sleepover at a friend’s house. In a way it’s not fair for a child.”

When school let out, Lea found herself separated from her friends by a disease that kept her from daycare. With one notable exception: a young girl from school named Whitney, whose mother made sure any playdates were scheduled around Lea’s needs.

“Now she’s like one of my best friend,” Lea said of Whitney.

Viviana wanted, as all mothers do, the best life for her child, so she began researching. She recalled hearing of a young girl with diabetes at the Medical University of South Carolina who had a diabetic alert dog, so Viviana began combing the archives of area newspapers for stories.

She finally found what she was looking for and learned that the young girl from MUSC had received her dog from Warren Retrievers, a unique organization devoted to providing diabetic service dogs.

“My husband and I made a call to Dan Warren, the founder of company, and we talked for an hour,” said Viviana. “Afterward, my husband said, ‘Let’s do it.’ It would be such a benefit.”

Service Dogs by Warren Retrievers, based out of Madison, Va., has helped place service animals in more than 300 households around the world. Dan Warren began the organization when he was diagnosed with Type One diabetes as an adult. His background in dog training made his mission clear, and the organization now provides dogs primarily for diabetes, but also for children with autism and those prone to seizures.

“He felt a passion that, ‘If I can train dog, why can’t others?’ ” said Trefzger.

For their clients, this means peace of mind. For young Lea, it means everything has once again changed. This time for the better.

“We’ll have such peace of mind once the dog is trained and in the house,” said Viviana. “Lea’s gone through a lot, and now she’ll be able to go to friend’s house for a playdate or sleepover as long as the dog will come. That will be an amazing change in her life and our life as a family.”

That peace of mind comes at a price, and the Sheeran family is quick to acknowledge the help of the Palmetto Hall community as well as their family and friends. If you would like to help the Sheeran family continue to give Lucky a good home and Lea a new lease on life, visit sdwr.donordrive.com and enter “Lea Sheeran” in the search field.

You can also follow her on Facebook, where her parents will be posting updates on Lucky as well as upcoming fundraising events. First, the family will host a fundraiser car was from 10 a.m.-2 p.m. on Saturday, Sept. 6 at the new Hilton Head Island Kroger.