It’s written on the side of the truck, but for Dan Fuller and the dogs of Urban Search and Rescue, it means a little more. 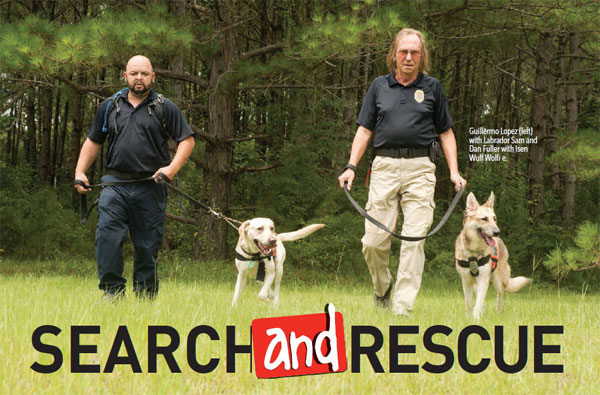 To your dog, it’s a floating hodge-podge of a million different scents, from the spray of the sea to the coconut perfume of 70 different kinds of sunscreen, from the acrid tang of plastic buckets to the savory rot of decaying sealife washing ashore.

It’s swirling around your dog all the time, everywhere he goes. It’s what makes their world so impenetrable from our human perspective. It’s what leads Dan Fuller, director of K-9 group Urban Search and Rescue, to have his volunteers spend their first training drill without a dog, on their hands and knees.

“I want them to think like a dog,” he said. “The hardest thing to teach a handler is to trust their dog. They can smell better than you, and at this level they’re smarter than you. This is what they do. They smell things … they’re basically a nose on four legs.”

Fuller knows better than most. As director of Urban Search and Rescue, he’s spent years following his dog’s nose. His volunteer organization trains and certifies dogs and their masters to assist in missing person searches, cadaver searches and post-disaster search all using the near-magical power of the canine nose.

At a moment’s notice, he and his team have been called out to searches ranging from Alzheimer’s patients who have gone missing to high-profile cases like the search for Caylee Anthony. Fuller, a Marine veteran of the Vietnam War, even assisted in the search for survivors among the World Trade Center wreckage.

“I was in Philly at the VA waiting on a prescription,” he said. “They were showing it on the news and right away we all knew it was terrorism. The first tower wasn’t even down yet and I was on my way out the door.”

It’s a truly dedicated group, human and canine alike, that acts as the volunteer corps at Urban Search and Rescue. Beyond dog handlers, Fuller relies on volunteers to run base camp, manage debriefs and serve as translators. Outside of his group, Fuller says he is grateful for volunteers in the community, like Dr. Mary Kay Campbell at Port Royal Veterinary hospital, who provides care for the animals.

The calls for Urban Search and Rescue come in at all hours, bringing volunteers to assist in searches up and down the East Coast. And the training required before even going on that first search, for both humans and canines, is intense.

The dogs tend to specialize based on their various skills, and after rigorous training they are sent out for general area search, live find, cadaver searches and even finding bodies underwater. Handlers will generally bring their own dogs, but in many cases the dogs are rescues from various shelters around the area.

“We’ve taken eight dogs off death row,” Fuller said. “And we proved a point that you can take a dog off death row and teach them to do something good.”

As their canine companion is trained to refine its sense of smell and associate this unusual game of hide-and-seek with a reward, the handler is trained in crime scene preservation, human and canine first aid, amateur radio operation and even weather.

“The biggest thing to learn is the weather,” said Fuller, pointing out how the winds can scatter the small particles of skin, called rafts, that the dog tracks, and how rain can almost completely destroy a trail. Fuller says that most of his volunteers work for a living, and depending on their schedule can take up to two years to be certified.

But the training prepares both dog and handler for a volunteer experience that is as richly rewarding as it is potentially hazardous. 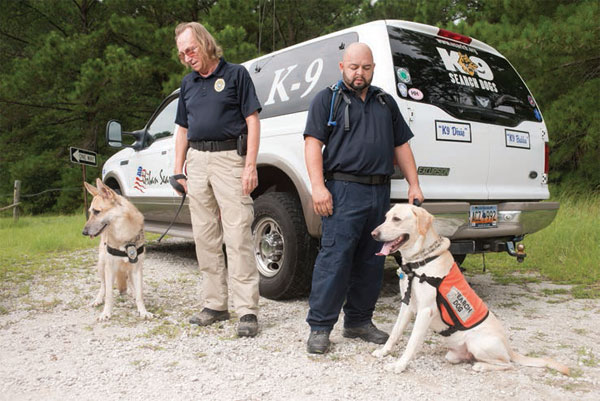 “We’ve been shot at,” said Fuller with the kind of casual straightforwardness only a Marine could pull off while saying something like that. “We wear body armor. The person who committed that homicide may or may not be in custody. Usually not. They do not want us to find that body.”

The risks, all the hours of training are worth it not only for Fuller, but for all of the selfless volunteers in his organization. Whether reuniting a family or simply giving loved ones some sense of closure after a tragedy, Urban Search and Rescue is able to go out and do a rare thing in this world: make a difference in people’s lives when they need it the most.

Said Fuller, “The whole thing is you want to save a life. If you can’t, at least you can give the family some closure.”

Viewed from far enough away, this group’s dedication, selflessness and charity forms a circle. Urban Search and Rescue rescues the dog from a shelter. The dog rescues those who are lost and those who need help. And sometimes the dogs, in turn, rescue their handler.

Fuller, who suffers from PTSD after serving his country in Vietnam, knows this like no one else.

“If you ever want unconditional love, get a German shepard,” he said, before adding, “I don’t pick the dog. I let the dog pick me.”

Urban Search and Rescue is always looking for volunteers (including those who want to volunteer in canine training as a warm body — view this story online for a first-person account of training day). To learn how you can volunteer, visit www.usark9.org.

I’m hunkered down in what amounts to a mudpit just to the side of a snarled-out scar of dirt cut through some pines off of 170. And the dogs are coming.

I’m nervous. I’m sweating. The second stems partly from the first, but mostly from the 90-degree sunlight baking the dirt lot just beyond the treeline.

OK, so maybe it’s mostly the nerves. Just moments ago I’d been led to this spot by Dan Fuller, a wiry former Marine tucked into a baseball cap and body armor and encased in a cloud of cigarette smoke. As we walked, he told me what to expect. He told me to get low, get down in the dirt, let the dogs find me. When they do find me, I was to absolutely make an ass out of myself praising them.

And oh by the way, we killed a six-foot rattlesnake last week right about where you’re hunkered down. It took 35 rounds.

I should point out that I was provided with a walkie-talkie and pepper spray for my protection.

“There are boar out here,” said Fuller, helpfully. “If you see one, hit him with the pepper spray then get your ass up a tree. We’ll come get you.”

There are three big assumptions there. First, that I could somehow operate pepper spray for the first time in my life and hit a charging wild animal with it. Second, that I was at all capable of climbing any of the loblollies in this forest. Third, that any of these trees, most of which I could fit my arms around, could hold me.

But I trust him. And more importantly I trust the dogs.

The first dog coming out to find me was an alert, energetic German Shepard with the seriously metal name Isen Wulf. Wulfie was a seasoned pro, even if his barking, sniffing and curiosity made him seem like a puppy. Then again, those are probably just by-products of his extensive search and rescue training. He’s supposed to sniff. He’s supposed to be curious.

These dogs have been heroes more than once. They’ve reunited families. Helped locate Alzheimer’s patients who had become lost. Too many times, they’ve only been able to give grieving loved ones the closure that comes with a body.

So finding me, especially with the heat and the sweat positively blasting my scent across half of Beaufort county as they were, should be a no brainer.

But I won’t lie to you. All the reassurances mean nothing when you’re kneeling down in the mud in the middle of nowhere, an intruder in the realm of rattlesnakes, wild boar and black widow spiders. You can repeat all the notes in your head you’ve been taking about how extensive the training is, but they all vaporize the second you see the funnel of a spider web just by your foot.

So I sit. I wait. I will my pores to fling my scent to the breeze. I try to recall which spiders live in South Carolina, and what their webs look like. I do a quick over-the-shoulder scan once every few seconds for any predators lurking behind me. I am one with the first primal man to come down from the trees and brave a world that desperately wanted him dead.

The seconds tick by. Or they would, if I had a watch. Instead they do whatever seconds did before man started keeping track of them. Out here, the seconds don’t care what time it is. The passage of time only exists in your mind, and my mind was busy scanning every echoing crack in the forest, every leaf turning in deference to a slight breeze.

Out here, seconds drag out.

And then there he was.

On the ridge above me, a pair of furry ears pointed daggerlike at the skies. Wulfi.

He stares down the slight embankment to my mudpit, huffs once and skitters down, finding a much easier route down the hill than the one I’d taken to the bottom. He’s on me in an instant, happily sniffing around my mudpit.

I was asked to completely humiliate myself singing the dog’s praises when I was “found.” I do that and more.

Over the course of the morning, I’m “found” four more times, hiding out in tall grass, tucked away behind a mound of dirt left over from some long-forgotten construction project, and deep in a ravine created by its runoff.

Wulfi always heads right to me. The other dog, Sammy, an energetic Golden Lab always finds me, but it’s clear Wulfi has the advantage of experience. What he lacks in experience, Sammy makes up for in enthusiasm. I’m being idiotic in my praise when Sammy finds me. Sammy is being apoplectic when he finds me. My shirt is quickly coated in mud.

And by the end of the day, I’ve helped these dogs practice their craft. Maybe one more person is found in time because the dogs were that much quicker.
And all the fear of spiders and snakes and wild boar that I was somehow expected to outrun actually made for a hell of a way to spend a Sunday morning. Urban Search & Rescue is always looking for volunteers to be found. Sign up at www.usark9.org.