IDENTIFYING THE AREA’S MOST COMMON VENOMOUS AND NONVENOMOUS SPECIES

I picked up the magnificent snake by the tail, admiring its bold pattern and shiny skin. The serpent had a glossy black hue, yellow bands and a dusting of minute chartreuse speckles.

Many years ago, Dave DesJardins happened to be browsing in a Borders books store when he chanced upon a book on wild mushrooms. Like most Americans, he avoided wild mushrooms for fear of being poisoned.

However, an avid hiker, he had often spotted many delicious-looking mushrooms in the woods. What made him buy the book was the fact that it showed those wild mushrooms paired with many delicious looking recipes for eating them. As they often say, the rest is history.

THEY MAY BE CREEPY, BUT BATS ARE ALSO CRUCIAL TO THE HEALTH OF OUR ENVIRONMENT. WITH A DEADLY FUNGUS WIPING THEM OUT BY THE MILLIONS, WHAT DOES THIS MEAN FOR US?

Much in the same way the streets of Gotham City swarm with criminals, so do the skies of the Lowcountry swarm with bloodsucking biting pests. Mosquitos, no-see-ums and their welt-raising ilk are inevitable down here during the outdoor season.

If you have ever seen Disney’s film “Finding Nemo,” you know that jellyfish are no laughing matter. Upon finding a baby jellyfish, “Finding Nemo’s” Dory decides to name it “Squishy” and keep it as a pet. This lands her in a field of jellyfish, where she gets tangled in their tentacles and is stung multiple times. Here on Hilton Head, jellyfish come through the waters each year, especially after big storms. With a variety of different kinds of jellyfish, it is best to be knowledgeable and safe when spending time on the beach or in the water.

How many times have you walked the beaches of Hilton Head Island and seen a horseshoe crab on the sand? Large and dark, with long pointed tails, multiple legs and flat “book” gills on their underside, they are commonly seen on our beaches, both alive and as skeletons. They are from a very ancient time, and look more like a Frankenstein experiment gone wrong than a modern-day crab; but then, they are not really crabs.

Horseshoe crabs actually are most closely related to spiders, scorpions, ticks and mites, and their ancestors have existed on earth from a time before the dinosaurs, a time when the first fish with jaws appeared in the oceans and glacial melting brought about a significant rise in sea level.

All of the above phrases describe the many roles that American alligators play on Hilton Head Island. Alligators belong to a group of reptiles known as crocodilians, which also include crocodiles, caimans and gharials. Crocodilians are closely related to dinosaurs, but their closest living relatives are birds.

hat's that? It's a question visiting mothers and fathers are asked constantly by inquisitive children during family beach days. Don't lose cool points by answering, "that's a bird, son." Impress your little one with a name and a quick fact about the critter in question. Here is a look at the 18 most common animals you will see at the beach.

FAR AS THE EYE CAN SEE, the sand shore runs 20 miles along the seaside on Hilton Head Island. “The beach,” as we call the flat, surf and tide-washed, pearl-colored, shellstrewn, stream-riddled, shorebird refuge and place of play for people on Hilton Head Island, is not one place. It is a seamless strand of seven beaches stitched together on the outskirts of this foot-shaped isle. Each shoreline is sculpted by distinct natural forces, and significantly altered by human history. Every beach holds its own secrets, including buried treasures of sorts. You can unearth these secrets — but you need to know where to look. 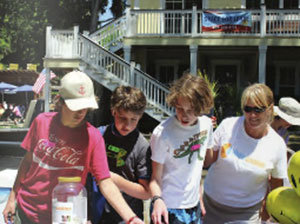 Safe drinking water isn’t just a third-world issue. According to Watercookies Inc., it’s an issue in communities across the U.S. as well. The group, whose mission is to educate young families about clean drinking water, was granted federal nonprofit status in 2013.
Helen Donelan Price launched the organization in 2011 after learning about the surprising lack of clean drinking water in a number of communities.

When you turn onto Old Palmetto Bluff Road, you might think you’ve arrived at your destination. You haven’t. Ahead of you is a three-mile jaunt through rows of Spanish moss-draped trees and only a fleeting glimpse of a house or two before you arrive in The Village.