Growing up in the small Lowcountry town of Estill, Stan Rogers lived an hour inland from the broad, flat Atlantic beaches along South Carolina’s coast. But Hilton Head Island always felt like part of the neighborhood.

“We were always going to the beach, down to Coligny, when I was growing up,” he says. “I wasn’t born on Hilton Head, but my backyard was the beach.”

Following in the footsteps of his father, a longtime manager for the South Carolina Department of Resources’ Webb Wildlife Center, Rogers earned a degree in aquaculture, fisheries and wildlife biology from Clemson University. He then embarked on a career as a public-lands manager for the U.S. Department of Defense and regulator for the National Oceanic and Atmospheric Administration in Washington, D.C.

Now, after a quarter century, Rogers has returned to his boyhood “backyard” to serve as superintendent of Gray’s Reef National Marine Sanctuary, which lies about 50 miles due south of Hilton Head and 20 miles off the Georgia coast.

The 50-year-old Bluffton resident took the reins in July 2019 after two years of interim leadership at the sanctuary. The staff was thrilled to have someone with such deep local roots, says Michelle Riley, spokesperson for Gray’s Reef. 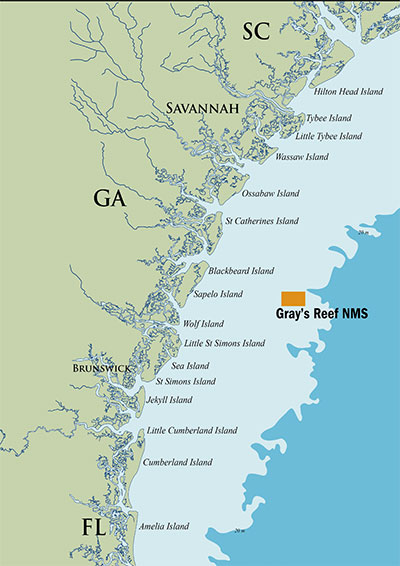 “With his childhood experiences — he was actually in the ocean in our part of the country all the time — and going to Clemson, Stan really understands the unique characteristics of our part of the mighty Atlantic Ocean,” she says.

Gray’s Reef is one of 15 “underwater national parks” designated since Congress created the National Marine Sanctuaries System in 1972. The sanctuaries protect natural and cultural resources in some 600,000 square miles of U.S. waters, from the Pacific to the Atlantic, the Great Lakes to American Samoa.

Established in 1981, Gray’s Reef is the only such sanctuary between Cape Hatteras, N.C. and the Florida Keys. It protects some 22 square miles of “live bottom” habitat — rocky outcroppings, crevices and ledges that are home to some 900 species of crab, lobster, coral, sea star and other invertebrates, and 200 species of fish, including sea bass, mackerel, grouper and shark, as well as threatened loggerhead turtles. The 70-foot-deep reef also lies within the winter-calving grounds for critically endangered North Atlantic right whales.

As superintendent, Rogers oversees every aspect of Gray’s Reef, including education and outreach, research, policy and management.

“At Yosemite (National Park), there are rangers, biologists, interpreters. It’s the same at Gray’s Reef, and I’m the manager in charge of our staff of professionals,” he says.

One of the sanctuary’s key purposes is to monitor long-term conditions of the reef, its resident and transient species and the surrounding ocean environment.

“It’s a climate-change sentinel site for things like ocean acidification, which negatively impacts corals and other species that require calcium,” Rogers says.

Gray’s Reef is also a recreation destination. Two-thirds of the sanctuary is open to fishing, and despite variable visibility conditions, it’s an increasingly popular spot for scuba diving.

“Some days you’ve got clear blue water with 30 to 40 feet visibility. On other days, you can only see as far as the end of your arm,” Rogers says.

Rogers was just getting his feet wet as superintendent when the COVID-19 pandemic struck in early 2020, resulting in the suspension of almost all field activities. The relative lull provided an opportunity to think about the future, he says.

“Had COVID not come around, the sanctuary would have continued on very much the same trajectory, without much down time or pause to think about what we aspired to be,” he says. “In having those conversations, things came about that may not have come about otherwise.”

Among those things are the anticipated launch of a new, larger research vessel in 2023 and the 2022 opening of a new visitor center in Savannah, which will host the U.S. National Marine Sanctuaries System’s 50th-anniversary celebration next summer.

“It’s going to be a great party,” Riley says.