FORT HOWELL GIVES VISITORS A VIEW OF THE CIVIL WAR

On Nov. 7, 1861, some 20,000 Union forces charged ashore on Hilton Head Island only to find that all Confederate fighters and white civilians had fled inland. The island was soon to become the United States’ Southern military headquarters for the duration of the war.

“Mitchelville was way ahead of its time, ahead of the Emancipation Proclamation,” the 1863 law that eventually led to the abolishment of slavery, says Lauren P. Williams, president of the Hilton Head Island Land Trust.

Many decades later, in the 1990s, Greenwood Development conducted an archaeological survey of the area in advance of a new development in Palmetto Hall. Though the sharpened-log palisade and artillery were long gone, the fort’s moat and massive earth walls were still visible. After archaeologists discovered a treasure trove of artifacts, from tents to jewelry to pots and pans, the company decided to deed the land to the trust for preservation.

“They realized it was an important site,” Williams says, “and they wanted to be sure it was protected.” 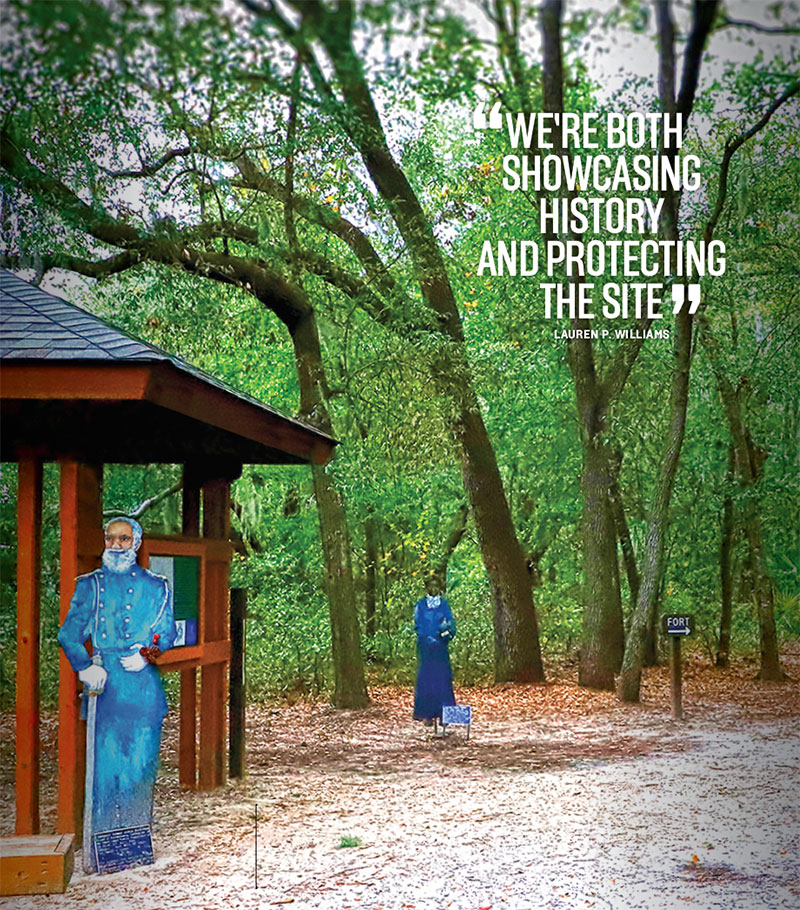 Now, thanks to a $15,000 grant funded by the town of Hilton Head’s tourist tax, historic Fort Howell has a new walkway to provide better access to visitors. The recently completed path follows the northeast contour of the fort along the remains of the moat to the north bastion, the highest point.

“It takes you halfway around the fort, so you can really get a different view,” Williams says. “What we wanted to do with the path was give visitors the same experience as an approaching enemy and give people a tangible connection to the history of the island.”

As of late 2020, about 1,700 people had visited the fort, 1,400 from out of town. Williams says the new path is also intended to give people a good view without having to climb on the walls which are subject to erosion.

“We’re both showcasing history and protecting the site,” Williams says. 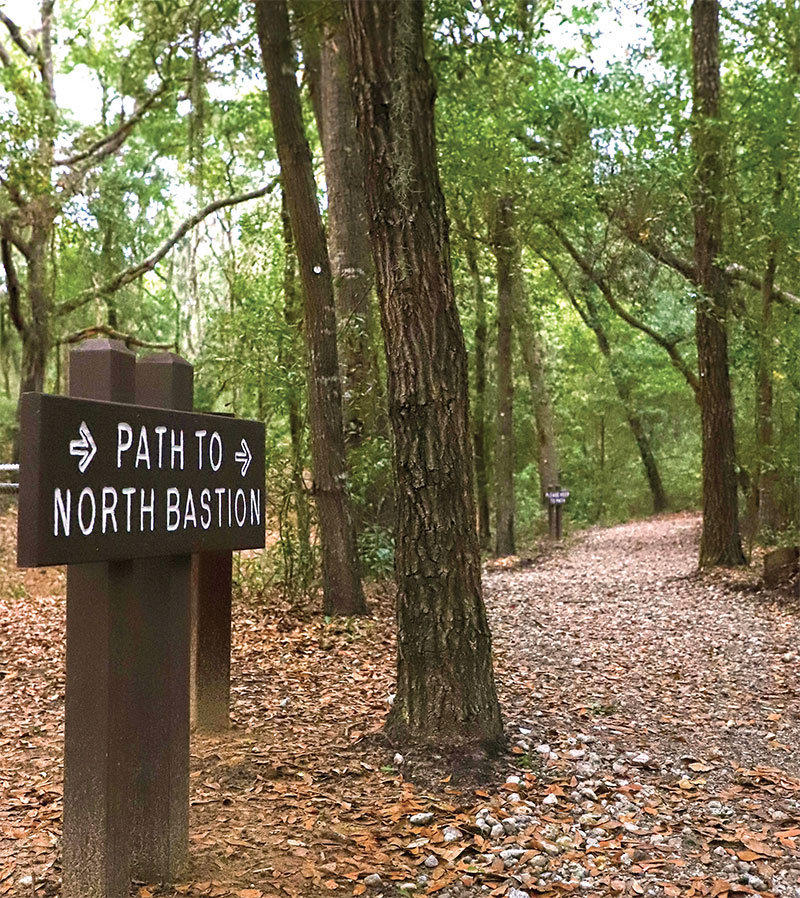 Still ahead for the $18,000 Fort Howell project are installation of interpretive signs and a refurbished parking area, Williams says. The site also features an information kiosk and figures representing soldiers created by local artist Mary Ann Ford. The fort is open from dawn until dusk, and admission is free.

Fort Howell is just a half mile southwest of Historic Mitchelville Freedom Park (exploremitchelville.org), which is currently amid its own archaeological survey in advance of a restoration project. The Coastal Discovery Museum’s “Uncovering the Roots of Reconstruction” tour takes visitors to both sides year-round (coastaldiscovery.org).

Fort Howell is one of five properties, totaling about 260 acres, protected by the trust, which was created in 1987 to protect significant parcels of land on Hilton Head for the enjoyment of future generations, according to the trust’s website. 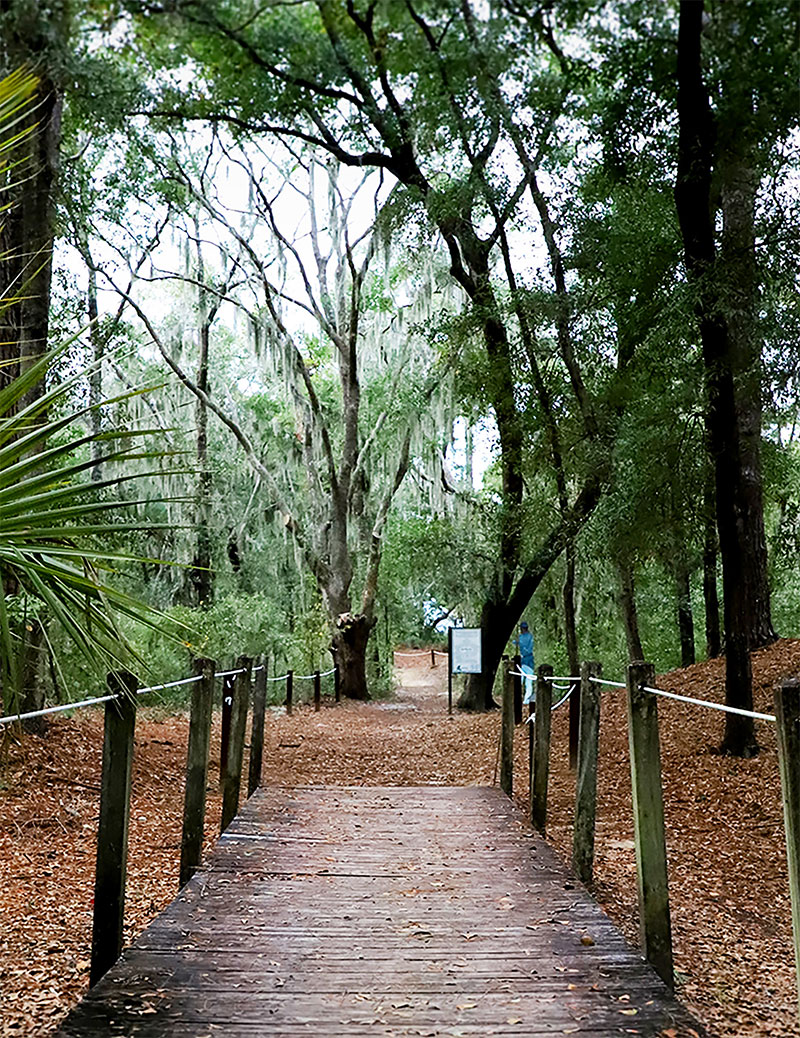 Besides the fort, the trust also protects four wetlands areas: 137-acre Whooping Crane Pond Conservancy in Palmetto Hall; the 64-acre Northridge Tracts, which are not open to the public; 51 acres known as the Cypress Conservancy; and the 3.3-acre Museum Street Property.

“The wetlands that the land trust oversees must remain healthy habitats for future generations,” says trust board member Carol Rivers, a certified master naturalist who conducts nature and history tours of the island. “Each strand in the web of flora and fauna we protect through proper management promotes an outcome that will continue to be positive for the future of Hilton Head.”